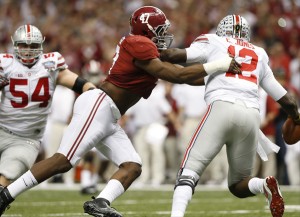 NEW ORLEANS (AP) — Cardale Jones came through again at the Sugar Bowl. Ezekiel Elliott ran all over mighty Alabama. And Urban Meyer’s quest to turn Ohio State into SEC North is one victory away from a national championship.

Jones turned in another savvy performance in his second college start and Elliott ran for 230 yards, leading the Buckeyes to a 42-35 upset of top-ranked Alabama in the College Football Playoff semifinal Thursday night.

Rallying from a 21-6 deficit, the Buckeyes (13-1) advanced to play Oregon in the Jan. 12 national championship game at Arlington, Texas. The Ducks routed defending national champion Florida State 59-20 in the other semifinal at the Rose Bowl.

Jones threw for 243 yards, including a 47-yard touchdown to Devin Smith that put the Buckeyes ahead for good early in the third quarter. He also ran for 43 yards and converted a crucial third-down play with a spinning, 1-yard dive and Ohio State clinging to a 34-28 lead.

On the next play, Elliott took a handoff, broke one feeble attempt at a tackle, and was gone for an 85-yard touchdown that essentially clinched the victory with 3:24 remaining.

Alabama (12-2) was denied a shot at its fourth national title in six years, though the Tide didn’t go down quietly.

Blake Sims threw a 6-yard touchdown pass to Amari Cooper with 1:59 remaining. The Buckeyes recovered the onside kick, but Alabama got it back one more time after some questionable clock management by Ohio State.

The Tide’s final shot ended when Sims’ desperation heave into the end zone was intercepted as time ran out.

Meyer, who led Florida to a pair of national titles, left coaching for a year before taking over at Ohio State in 2012. He said his goal was to build the sort of Southeastern Conference powerhouse he had with the Gators, and he knew a faster, more athletic style would be needed to bring the Big Ten school up to par.

Now, after just three years on the job, he’s one win away from bringing the Buckeyes a national title.

Jones started fall practice as Ohio State’s third-string quarterback, moved up the depth chart when star Braxton Miller sustained a season-ending shoulder injury, and became the starter for the Big Ten championship game after J.T. Barrett went down with an injury.

A 59-0 rout of Wisconsin showed that Jones was up to the job. His performance against Alabama gives him a chance to go down as one of the greatest replacement players in college football history.