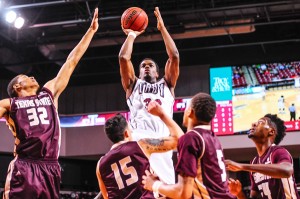 The Troy men’s basketball team fell behind by 14 points at halftime, rallied to outscore Texas State in the second half, but, ultimately, were done in by cold shooting stints throughout the game as they dropped their conference opener to the Bobcats 57-46 Tuesday night at Trojan Arena.

Troy’s (5-5, 0-1) offensive struggles began early in the contest Tuesday night. After jumping out to a 15-6 lead behind two 3-pointers from Musa Abdul-Aleem and a 13-2 run in the first half, the Trojans went completely cold from the field, going scoreless in the final 11 minutes and 35 seconds.

In a game that featured several scoring runs from each team, Troy opened the second half with a hot streak of their own.

The Trojans came out of halftime with a high-pressure zone press, creating turnovers and shooting woes for the Bobcats, and Troy orchestrated a 26-12 run to tie the game at 41.

Abdul-Aleem led the Trojans with a game-high 20 points. He was the only Troy player who finished in double-digits. John Walton III and Aaron Ariri both collected a team-high five rebounds.

Texas State easily outshot Troy in the game, shooting just under 43 percent from the field to the Trojans’ 27 percent.

Troy will return to the court Saturday when they visit UL-Lafayette for their second conference tilt.