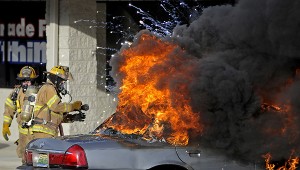 Main, Troy Fire Department extinguishes a car fire which occurred at CarMart on US Highway 231 in December. Bottom left, Detective Mike O’Hara uses a metal detector to search for bullet casings after the officer-involved shooting which occurred at the Easy Street Apartment Complex in December. Bottom right, agents investigate parts of a moonshine still which was busted in November by Pike County Sheriff’s Department.

Troy Fire Department has responded to approximately 20 structure fires and more than 2,400 total service calls, according to Capt. Buford Stephens.

“We’re going to have close to 20 structure fires for this calendar year,” Stephens said. “People use a lot of verbiage to describe fires, but we probably have 40 fire calls to houses. We have no fire fatalities in the city or in our fire jurisdiction. We’ve been very fortunate for this year.”

Stephens said the fire department had run approximately 1,800 calls by the middle of December.

For the last six or seven years, Stephens said the fire department’s run volume had increased significantly. “Our run volume has probably increased from 400 to 500 calls a year for fires and vehicle. This year we’re at 2,491, so we’re going to have just over 2,500 calls for this year to date.”

“It’s really a jurisdiction thing that says who responds,” Stephens said. “If it’s a wreck out in the county we’ll be first responders to a major wreck with lots of damage or entrapment. If the Town of Goshen, Town of Brundidge, Banks, whoever, whatever volunteer department deems they need assistance, we’ll send a truck and manpower.”

The Pike County Sheriff’s Department has been as equally busy this past year having closed several cases.

“We asked for an additional deputy this year because we have an investigator retiring with 30-plus years of experience,” said Pike County Sheriff Russell Thomas, adding that the hiring of a deputy actually gives the department the opportunity to fill the opening at a lower salary. “We’re really trying to add two employees at minimal cost. We need more help, but the county’s budget hasn’t been there over the years.”

The Sheriff’s Department also made a couple of high-profile raids in the fall, busting a moonshine still in October and a meth lab in November.

Joshua Chad Little, 34, of 658 County Road 1117, was arrested in November after deputies seized a meth lab at his residence in the Shellhorn Community.

Deputies seized three bottles containing meth oil, two other bottles containing a white past-like substance tentatively identified as ephedrine, and a cold-pack – all of which are consistent with a one-pot cook method for meth, Thomas said at the time.

The moonshine bust took place near Gardner Bassett Road and was conducted through investigative efforts by the Department of Conservation, and the Pike County Sheriff Department, with the assistance of the Alabama Alcohol Beverage Control Board.

Thomas said 20 barrels were found, each of which produces approximately seven gallons of finished product, totaling roughly between 140 and 150 gallons of illegal alcoholic beverage.

This past year was also a time for cooperation between the sheriff’s department and Troy Police Department. In mid-October, the departments worked together to arrest three juveniles in connection to a cross-county four-wheeler burglary spree. Thomas said the collaboration between the two agencies was crucial in not only recovering the four-wheelers but in also stopping more thefts from occurring.

Troy Police also experienced the department’s first officer-involved shooting since 1988 on Dec. 18, when an interrupted armed robbery attempt led to the shooting and the arrests of four suspects.

The incident took place around 7:20 p.m., when Troy Police responded to a report of an armed robbery at the Easy Street Apartment complex on George Wallace Drive.

“Officers arrived on the scene and made contact with the robbery suspects attempting to flee the residence,” Weed said. “During initial contact with the armed suspects, shots were fired. No officers or suspects received any life threatening injuries.”

One suspect was shot in the leg in the incident, confirmed Alabama Law Enforcement Agency Trooper Kevin Cook. No other suspects or officers were hit.

Cook said there was “an exchange of gunfire,” but could not confirm how many shots were fired by each party.

Dewayne A. Dunford, 32, Montgomery; Dundray C. Dunford, 20, Brundidge; Johnta L. Briggs, 30, Dothan and Dajuan D. Franklin, 18, Dothan, were arrested at the scene. Each was charged with three counts of robbery first degree and one count of burglary first degree. Their bonds were set at $400,000 each.

The robbery remains under investigation by TPD, with the Alabama Law Enforcement Agency/ State Bureau of Investigation investigating the shooting.

Troy police also made several key drug arrests, including assisting the DEA in the arrest of two Pike County men on charges for conspiracy to posses with the intent to distribute methamphetamine in late November.

Jose Hernandez, 25, of Troy, and Cristian Alonzo Espinoza, 21, of Troy, were arrested Nov. 19 after a large amount of crystal meth, or ICE, was recovered from the residence in Hunters Mountain Parkway.

Hernandez and Espinoza were transported to Montgomery and will appear in the Federal Court of the Middle District of Alabama to determine if they will be released until their trial, which has yet to be set.

Espinoza and Hernandez were both charged with conspiracy to posses with the intent to distribute methamphetamine, and Weed said sentences for the two would be determined by the weight of the methamphetamine that had been taken for analysis.

In September, a couple was arrested for trafficking meth and possession of a controlled substance after a traffic stop led to the recovery of liquid, incomplete methamphetamine in their vehicle. Larry Wayne Putnam, 45, and Jessica Lynn Byrd, were charged in that incident.

Another July traffic stop also led to an arrest of a man who was in possession of more than a kilo of methamphetamine. After receiving information from the DEA, officers located Calen Odell Chacone, 23, of Newton, Ala., and observed his vehicle until they were given probable cause to stop and conduct a search with one of the City’s K-9 units.

Chacon was charged with possession with intent to distribute methamphetamine. He was transported to Montgomery where he is being held without bail pending a detention hearing in the Federal Court of the Middle District of Alabama.

Brundidge recorded its first murder of the year on Dec. 27, when Pryzim Thesolonnians Ransom was killed during an early morning shooting incident. Ransom was one of several people gathered near the Upper Kutz barbershop near the intersection of Veterans Boulevard and Henderson Street when the shooting took place. Two other individuals were injured and police are still trying to piece together what led to the shootings.

“The Brundidge Police Department is actively involved in interviews at this very moment,” District Attorney Tom Anderson said Monday. “They’re learning a lot more about the circumstances related to the shooting and the actual shooting itself.”

As of Wednesday, no arrests had been made in the case.

It was also a busy year for Anderson’s office as a 2011 double-murder case went to court, garnering three convictions and one pending trial, and prosecutors sought reprieve from the state Supreme Court in a 2012 rape conviction.

Brandon Ryles, Marquisse McClaney, John Foster and Troy McClaney were arrested in connection to the double homicide of Carla Smilie and Mark Adams, who were shot and killed in 2011 in Adams’ residence off of Needmore Road.

Ryles was convicted of two counts of felony murder in mid-September and will serve two life sentences in prison.

The date and time for Foster’s trial has still not been set.

The Alabama Supreme Court has for a second time denied a motion by the Pike County District Attorney’s Office to overrule a judge’s decision in the case of accused rapist Andre Ellis.

The motion challenged Circuit Judge Jeff Kelley’s jurisdiction and several of the issues he raised in a May 2013 order overturning Ellis’ rape conviction and asked for a writ of mandamus to set aside Kelley’s decision.

“It is what it is,” said District Attorney Tom Anderson. “We’re disappointed, and we respectfully disagree … but we know where we stand and we’ll muscle forward providing the victims are willing.”