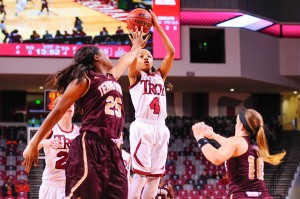 Ashley Beverly-Kelley almost literally did it all Tuesday night in Troy’s conference opener against Texas State.

But in the end, her 32-point, six-rebound and five-assist effort came up just short as Texas State topped Troy 74-72 at Trojan Arena.

“We’re disappointed not to get the win tonight in Trojan Arena,” Troy head coach Chandra Rigby said. “I think our team played well at times. The thing I remember is at times when they (Texas State) didn’t play well, we didn’t capitalize on it.“

Beverly-Kelley routinely saved Troy from insurmountable Texas State leads throughout the game. With each Bobcat run, there was the junior guard to dig the Trojans out.

After being fouled from behind the 3-point line with the Trojans down 73-70 with three seconds to go in the game, Beverly-Kelley went to the line to try and save Troy one last time.

After sinking the first of three, her second shot rimmed out and her third swished through the net. Down 73-72, all Troy could do was foul the Bobcats and watch the final two seconds disappear from the clock.

Beverly-Kelley’s 32 points was just one shy of her career-high point total of 33. She shot every one of Troy’s free throws in the game, going 6-of-8 from the charity stripe.

“I felt like it was time for me to step up,” Beverly-Kelley said. “It kind of shocked me when it (second free throw) went in and came out. I didn’t hold my head down, I was just like, ‘get it back.’”

The Trojans were down often, but were never out of the game. After going down 30-23 midway through the first half, Beverly-Kelley scored 12 of the team’s last 16 points of the half to bring Troy to within 41-39 at halftime.

In a mostly even second half statistically, Troy struggled mightily from 3-point range, finishing 8-of-26 on the night.

After falling behind by as many as eight points early in the second half, the Trojans regularly closed the gap to as few as two points but never took the lead.

Erin Peoples led the Bobcats with a team-high 17 points.

Aissata Maiga and Kourtney Coleman chipped in with 10 points each for the Trojans.