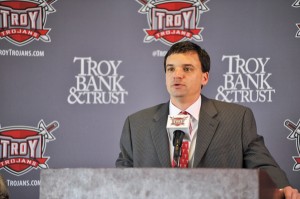 The Troy football program looks a little different than it did just four months ago.

Troy’s 2014 campaign was an unexpected whirlwind of a season, culminating, of course, with legendary head coach Larry Blakeney stepping down after 25 seasons leading the Trojans.

For many, this came as a complete shock.

And in 2014, Troy had started the season 0-5, including a heartbreaking 38-35 loss to Abilene Christian.

But despite the bad fortune, not many expected the news that would come on Oct. 5.

There, Larry Blakeney announced he was retiring at the end of the season.

“Well I have been working on it (deciding on retiring),” Blakeney said at his press conference. “We have been talking about a week. You don’t jump in or out of college football…You never know what you’re going to experience.”

After Blakeney’s sudden announcement, the rest of the season was a mixed bag for Troy.

The Trojans, perhaps fueled by inspiration to finish strong for their coach, came out the next Saturday, scorching New Mexico State on Homecoming weekend at Veterans Memorial Stadium in a 41-24 win.

The next week, Troy was demolished at home by Appalachian State, 53-14 their first loss of a three-game losing streak that saw the Trojans lose to South Alabama and Georgia Southern in back-to-back weeks.

And when the final whistle blew in Troy’s last game against UL-Lafayette, all attention turned immediately to athletic director John Hartwell as fans were dying to know who would take the reins as new head football coach.

After news of Brown’s hiring began to circulate just hours after Troy’s final game, the university officially introduced their new coach on Dec. 1. And if games could be won alone on charisma and the ability to command attention at a press conference, Brown would be undefeated.

Brown’s hiring was clearly a breath of fresh air for everyone in attendance and Troy fans around the state clamoring for a return to glory for the Trojans.

The press conference yielded even more great news: the university would begin construction on the north end zone after the 2015 season, Hartwell announced that same day.

Construction on the north end zone had been more myth than fact, as many current Troy players remember being told about the renovations as far back as their freshman year of high school.

But with the hiring of Brown, the announcement of a north end zone construction project and the decision to up the assistant coach salary pool to $1.2 million for Brown’s new staff, it’s clear that Hartwell is intent on forgetting about 2014 and will go all out to make 2015 a step back in the right direction.

Hartwell said it himself regarding the future of Troy athletics on Dec. 1.

Troy UniversityMusa Abdul-Aleem dribbles past a defender in Troy’s Dec. 21 game against Nicholls State. Injuries and inexperience. Those were... read more