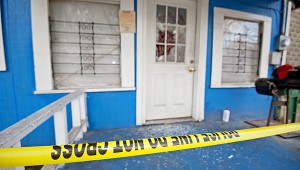 His mother, Rebecca Ransom, said if she could have changed anything about her son it would have been that he was so kind, because she believes that kindness is what ultimately killed him.

“I’m going to miss both of my children being at home, laughing, playing,” Rebecca said on Monday. “He was the type of person that if I had to do it all over again, I would ask God for the same child. I wouldn’t change a thing about him, except him being there that night. That’s the only thing I would change, because he cared too much. I would have changed him caring. He wasn’t Superman. He couldn’t help every body.”

The shooting took place shortly after midnight, and as of Monday officials were still trying to confirm what led to the incident, which left Ransom dead and two others injured.

An officer had been driving through the area of Veterans Boulevard and Henderson Street when he heard gunshots just after midnight, BPD Chief Moses Davenport said.

“The officer went to (the Upper Kutz barbershop) to investigate and found two males lying on the ground,” Davenport said.

Davenport said many shots were fired, and some victims were shot multiple times.

A second victim was transported to Troy Regional Medical Center and later flown to a Montgomery hospital where he was listed in critical condition, and a third victim was driven by private vehicle to TRMC with non life-threatening injuries Friday night. Davenport said the victim in Montgomery had improved as of Monday morning and the victim taken to TRMC had been released.

Two guns were recovered at the scene, both semi automatic small- to medium-caliber weapons.

But Rebecca Ransom said on Monday her son was at the barbershop because his cousin, Jeremy Rumph, had called him for help.

“By the time he got up there and got out, the guy had ran to the truck and started shooting,” Rebecca said.

“The bullet hit my son in the chest.”

And on Monday, she simply remembered the boy she loved.

“He was a football player, he loved football,” she said. “That’s all he ever wanted to do was play football. You might as well say was that was all he did was play sports. He ran track and would go right back to football. That’s the type of person he was. All of the people that have talked to me at church said he had a good attitude.”

Ransom was born in Enterprise, but grew up in Brundidge. He graduated from Pike County High School. Rebecca said that even through this difficult time, the community was coming together to support her and her family.

“Some people that I don’t even know came by,” his mother said. “I was at Walmart last night and some lady came up and she said ‘I am so sorry.’ She was hugging me, and I didn’t even know who she was.”

The family is hosting a candlelight vigil at 7 p.m. today at the intersection of Veterans and Henderson, where Ransom was shot and killed. Attendees are asked by the family to wear red.

“We’ll have red candles, and we’re going to try and wear red because it was his favorite color,” his mother said.

Davenport said previously that investigators had suspects in mind, but declined to provide further details concerning the case because of the ongoing investigation.

The incident is still under investigation by the BPD and the District Attorney’s office. Davenport and district attorney Tom Anderson encouraged anyone with information on the shooting to contact the BPD at 735-3333.

“The Brundidge Police Department is actively involved in interviews at this very moment,” Anderson said. “They’re learning a lot more about the circumstances related to the shooting and the actual shooting itself. However, there’s nothing at the present time that we are able to divulge that has not been previously disclosed to any media outlets.”