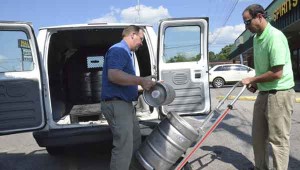 Kegs of beer were loaded and delivered to Troy bars and restaurants in late April, as the city allowed draft beer sales for the first time.
MESSENGER FILE PHOTO

From draft beer to controlling litter, creating bike paths to allowing home-based businesses, Troy city officials charted a path for growth and development through a series of crucial ordinances during 2014.

Raising a glass to ‘on tap’

Next time you order a draft beer in Troy, think of Jamie and Lindsay Taylor. The owners of Sips on the Square sparked the public campaign to allow draft beer sales in Troy. “People coming in from out of town, they don’t comprehend that Troy doesn’t do draft beer,” Lindsay said in February. “It’s embarrassing.”

So the Taylors polled their customers and the city council members; they lobbied the county commissioners; and they started a petition that garnered more than 350 signatures within two days.

On Feb. 11, they met with the council and found support. Councilman Marcus Paramore said his constituents are in favor of draft beer service in Troy. “When I campaigned for this office over half of the people I talked to brought up draft beer,” he said.

Council members already had contacted state representatives, who would have to push through a bill allowing the sales, once the county commission and individual municipal governments authorized the measure. “Draft beer sales will increase tax revenue and that will benefit the whole county,” state Rep. Alan Boothe, R-Troy, said at the time.

“Now that the law has passed, it’s been extremely exciting that people are receptive and supportive of it,” Lindsay Taylor said. “The response has been super positive and everyone says the beer tastes great, so that’s a plus.”

In June, council members revised the existing litter ordinance, strengthening the guidelines and making the ordinance more applicable to trouble spots. The ordinance includes provisions for timetables on cleanup, penalties assessed for violators and give specific time periods for cleanup.

As part of the revision, the definition of litter was expanded to include more types of waste. Junk garbage, refuse and rubbish also have expanded definitions Building Official Chuck Ingram said in June that the updated regulations on time frames in the ordinance have been a big help in enforcement.

Within 60 days of taking effect, Ingram said the ordinance had already generated 12 complaints. Of those, 11 of the 12 individuals cited were working to clean up the problem and one citation had been issued.

“It’s put an honest to goodness time frame on what has to happen,” Ingram said. “In the past we didn’t have the potential to enforce a time frame. Now we can enforce with the public a time frame in print.”

The city also made an effort to inform the public about the new ordinance, including new literature such as brochures. “The literature provides the time frame and consequences,” Ingram said. “We, the city of Troy, have done a better job of educating the public of the consequences, which validates the litter ordinance, and we get it done.”

In June, council members approved a new ordinance regulating the use of bicycles within the city’s jurisdiction. The ordinance centered on bicycle safety, outlining rules for motorists passing bicyclists (requiring three feet of clearance until the bicycle is overtaken) and designating bike paths and guidelines for cyclists.

Troy University professor and avid cyclist Greg Skaggs was among the proponents of the measure. “I’m anxious to see specified bike paths, but routes are a great start for Troy,” Skaggs said. “I still have a little hesitation using the bike routes, but the more people use it and share the road, it will create an awareness.”

In addition to the ordinance, city officials installed bike racks in downtown and added “bike route/share the road signs” throughout designated areas of the city.

In January, officials passed a zoning ordinance to simplify the steps for opening a small home business. The ordinance designates three tiers of businesses, based on the impact each will have in the neighborhood. We feel that this ordinance will strengthen our neighborhoods going forward and ensure the integrity of our residential neighborhoods,” said Melissa Sanders, Troy’s city planner.

Ed Telfair, president of the College Street Historic District Neighborhood Association, said both the ordinance and enhanced enforcement were necessary. “My concern is heretofore in the past there have been instances where people have started home businesses and did not follow the guidelines laid out by the city’s zoning code,” Telfair said. “The ordinance itself is good I just want it enforced.”

Sinkholes were discovered along George Wallace Drive in February, prompting about three weeks of repairs in June.

While the Enzor Raod and Henderson Highway projects were completed by mid-year, the Madison-Montgomery-Three Notch Street project proved a bit more wieldy and long.

The city closed the section of South Three Notch Street on June 23, and at the time Public Works Director Vaughn Daniels estimated the project would take two to three weeks to complete. “It will improve traffic flow and reduce congestion on Montgomery and Madison streets,” Daniels said. “It will enhance our city and make it better for everyone once completed.”

The street officially reopened in early December, pending final “punch-list” approval. “All we have left are some small, small items and a punch list, where will just say ‘there’s a crack in the sidewalk or there’s not been the proper amount of sod put out.’,” said Assistant Utilities Manager Mike Davis.

Davis said several complications extended the project, including the discovery of storm drain that was too old to be renovated and non-ADA compliant sidewalks. “This August we were almost finished with it for a little while,” Davis said. “We had some issues with it.”

Then, city officials discovered the sidewalks were not ADA-compliant. “It wasn’t any cost to the city, but it was a blow to the project fixing the sidewalks. It probably extended the life of the project of about three weeks,” Davis said.

Troy Mayor Jason Reeves said he understands the toll the long closure took on the area, but he believes the result will provide benefits for years to come. “I know there were times where it was a tremendous burden for people who owned property around that area or lived in that area. We’re just thankful that we’ve come to the end of it. I think now that the work is done it will be beneficial to the city and through traffic.”

The city delayed the Elm Street Road repair and resurfacing project until 2015.

While infrastructure was improved and guidelines were being put in place, city officials also continued to focus on future growth.

In May, the city celebrated a ribbon cutting ceremony for the completion of Troy Municipal Airport’s Runway 7 extension. The project was more than a decade in the making, and includes the addition of a new ILS at the airport. The system provides elevation information to help pilots land – even in conditions with poor visibility. “We feel like this is going to be critical. It will help our existing industries and help new industries,” Reeves said.

Efforts to revitalized downtown Troy got a $40,000 state grant this year, as well.

“We’re excited about this grant,” said Sanders. “One single project cannot revitalize a downtown area, and we know that it’s going to take an ongoing initiative and project. This planning grant will help us define the vision and the plan.”

The Community Development Block Grant will be paired with a $10,000 match from the City of Troy, providing $50,000 for the project.

The plan will formulate long-range strategies that will promote and encourage economic growth in the city’s central business district (including the Square) and secondary areas such as Railroad Avenue, Murphree Street, Madison Street, Elm Street and Three Notch Street. It will address issues from parking to building use, streetscapes to public spaces, future use and growth of the area.

The City of Troy also paid tribute to two influential leaders this year.

In March, the city renamed the utilities building in honor of Grady Homer Reeves, longtime public works director and grandfather of the current mayor. Former Troy Mayor Jimmy Lunsford said Reeves initiated Troy’s utility partnership with other cities and later was responsible for Troy breaking free of the coalition to become an independent energy supplier to the city’s 7,800 residents. At the time, Reeves recommended the city float a bond issue and buy a big block of power from a utility supplier. “It cost us some money,” Lunsford said. “But it was the best money we ever spent.”

Lunsford said the savings had a domino effect. The money allowed Troy to build a new sewage treatment plant and having the sewage in place attracted new business to the area. “We’ve grown so much in recent years. But nobody will ever touch the decisions made by Mr. Homer Reeves,” Lunsford said.

Later that month, city officials honored Troy University’s Director of Banks Emeritus Dr. John M. Long Jr. by announcing the former Collegedale Street would be renamed in his honor. Many of his former students attended the ceremony. Robert W. Smith, an alum who is now a member of the University’s music faculty, said each of them represented Long’s legacy and they stood on the shoulders of a giant.

“This isn’t just a simple giant. This is an amazing giant, a giant teacher, giant musician, giant in terms of friendship. There are more band directors from Troy than anywhere else in America. When you were a student of Dr. Long’s, you were a student for life,” Smith said.

Long started at Troy University in 1965 with a band of 13 members. Within a few years, the band grew to more than 250 and today is recognized as one of the best collegiate bands in the nation.