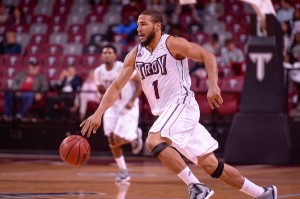 For a team returning just three players from the year prior, predictions were hard to make for the Trojans.

Only adding to the uncertainty for Cunningham was injuries. And plenty of them.

“Our junior college guard (Jeremy Hollimon) in all likelihood is out for the year. He had knee surgery,” Cunningham said in a press conference before the season. “The one (injury) that has really been disruptive to our team at this point is Oskar Reinfelds. He is one of our experienced guards. He has one year of Division 1 experience. We only have seven years of Division 1 experience on our team.”

And yet, at the end of their non-conference grinder that pitted the Trojans against the likes of Georgia, Ole Miss and Southern Miss, here stands Troy at 5-4 overall. And the Trojans are a combined five points away from sitting at 7-3.

How Troy got here is simple.

Wesley Person made his case in Troy’s biggest game of the year so far against Ole Miss.

The freshman came up huge in the Trojans’ 74-64 loss to the Rebels, scoring a career-high 25 points.

Although Troy came up short, Person made an impression. And he’s kept it going, scoring in double digits in seven of Troy’s nine games this year.

And in those two games that Person was ineffective, there was South Florida transfer Musa Abdul-Aleem to pick up the slack.

Abdul-Aleem is one of just a few Trojans with Division 1 experience, and it has showed. The senior guard put up a season-high 24 points against Fort Valley State and added a game-winning shot to his resume on Dec. 21 when he sunk a buzzer-beater against Nicholls State to seal the win for the Trojans, 65-64.

And Troy veteran Kevin Thomas, who has been a silent leader for the team, has quietly had a career season, recording four double-doubles. The senior forward is shooting 67.2 percent from the field, ranking him fourth in the NCAA, and his 8.4 rebounds per game rank him ninth in the nation.

And with Reinfelds getting back into the rotation, Troy is hitting their stride at just the right time before conference play.

What the Trojans lack in experience, they clearly make up for up to this point in the season with grit and athleticism.

Troy will host Texas State Dec. 30 in their first Sun Belt matchup of the season.