One dead after Brundidge shooting 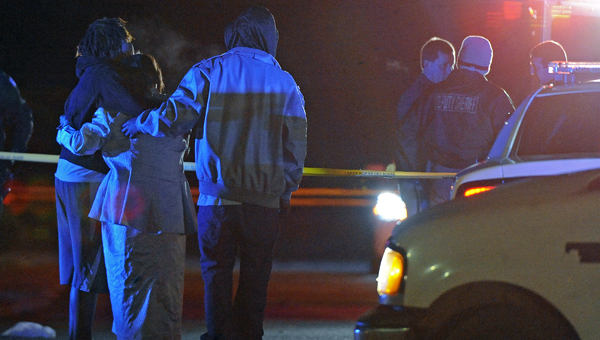 Family members embrace each other at the scene of a shooting on Veterans Boulevard in Brundidge, Ala., early Saturday, Dec. 27, 2014. One person was killed at the scene, and others were transported to a local hospital. (Photo/Thomas Graning)

Pryzim Thessalonians Ransom, 23, of Brundidge, was killed in the incident, Pike County Coroner Jerry Williams confirmed. A second victim was transported to Troy Regional Medical Center, and later flown to a Montgomery hospital where he remains in critical condition. A third victim was driven by private vehicle to TRMC with non life-threatening injuries.

A Brundidge police officer was driving through the area of Veterans Boulevard and Henderson Street when he heard gunshots just after midnight, BPD Chief Moses Davenport said.

“The officer went to investigate and found two males lying on the ground,” Davenport said.

Davenport said many shots were fired, and some victims were shot multiple times.

The suspects and the victims were related, according to Davenport.

“They were not close relatives, but they were the same bloodline,” Davenport said.

Davenport said investigators are still determining if there was a shootout between the parties.

Two guns were recovered at the scene, both semi-automatic, small to medium caliber weapons.

Davenport said investigators have suspects in mind, but declined to provide any details, citing the on-going investigation.

The incident is still under investigation by the BPD and the District Attorney’s office. Davenport encouraged anyone with information on the shooting to contact the BPD at 735-3333.