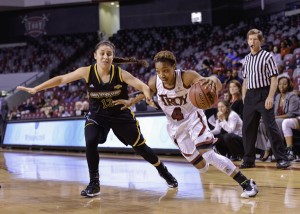 Troy University
Ashley Beverly-Kelley drives past a Southeastern Louisiana defender in the Trojans’ Nov. 21 matchup with the Lady Lions. Below: Ronita Garrett shoots over a defender.

The Troy women’s basketball program’s win over Tennessee State Dec. 20 was meaningful for a number of different reasons.

First, there is the historical aspect.

The Trojans’ 75-71 win over the Lady Tigers signified the first time that the Trojans (5-4) will enter Sun Belt play with a winning record since 2009-10.

With a team so filled with youth and inexperience — the Trojans have just four seniors on their roster — going into conference play with the momentum and confidence of a winning nonconference record is invaluable.

Then there was the statistical side to the win.

Saturday night, senior leader Ronita Garrett continued her tear through the Trojans’ nonconference opponents, tallying 16 points and 10 rebounds to give Garrett her third-straight double and seventh this season.

Garrett failed to score more than 10 points just once so far this season — a five-point performance against Samford.

Even more impressive from Garrett is that in the Trojans’ two games against major conference opponents this season in Auburn and Clemson, Garrett averaged 15 points.

What has to be even more encouraging for Troy head coach Chandra Rigby is how her team responded in the one off game Garrett had this season.

Against Samford, Garrett couldn’t get on track. But key bench players like Caitlyn Ramirez and other role players like Ashley Beverly-Kelley and Kourtney Coleman stepped up in Garrett’s absence.

“We don’t want to lose another game before Christmas,” Rigby said Dec. 3 after that win over Samford. “That’s all I want for Christmas.”

Troy did end up losing before the holidays, a 94-85 shootout loss to Evansville.

But what Rigby is getting out of her team around Christmas time should be more than just a consolation prize.

The Trojans have gone 3-1 in December and have won five of their last seven games.

They are going into their Dec. 30 matchup with Texas State knowing that they can compete with anyone.

The team is beginning to jell and players are falling in line with their roles on the roster.

And although Evansville assured that wouldn’t happen, a win against Texas State could be the step in the right direction.

It’s not undefeated, but going 4-1 certainly isn’t bad, either.