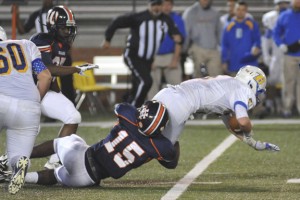 The Alabama Sports Writers Association announced their All-State team Tuesday, and for Troy-area sports fans, there may be some familiar names scattered across the list.

In 5A, Auburn recruit, Under Armour All-American and Charles Henderson linebacker Richard McBryde was selected to the All-State First Team.

And two of Mcbryde’s teammates made appearances of their own on the ASWA All-State roster.

Austin Ingram, the senior quarterback for the Trojans who helped lead the team to a second-round state playoff berth, was named to the ASWA All-State Second Team.

Ingram finished the regular season with 2,102 yards passing. In each year as a starter, he has passed for more than 2,000 yards, including 2,148 as a sophomore and 2,480 as a junior when his team went to the state championship game.

One of Ingram’s favorite targets, Jalante Smith, also made an appearance.

The junior wide receiver was also selected to the ASWA All-State Second Team.

The Eagles secured a playoff berth this year, losing to Geneva County in the first round.