BANKS – Amy Lewis could do little besides watch as her home burned late Tuesday. 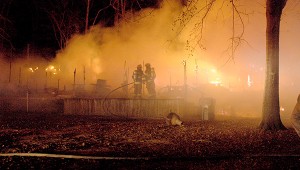 “We just paid off the house last month,” she said as flames smoldered at the residence on Highway 223.

Lewis and her husband, Jerry, along with their son Kyle, daughter Kristen and grandson Colton were not at home when the fire started. They

According to Amy, the family had been staying in her mother-in-law’s house after their home had been vandalized late last week.

“They destroyed the cabinets, the walls,” Amy said. “They poured paint all over the walls. They took two firearms, a crossbow, a carburetor and they could have gotten more stuff. It was so vandalized we couldn’t even really go through it. They busted every window out of the house.”

And the fire, which was reported around 5 p.m. Tuesday, simply added insult to injury.

The fire report was called in to Troy Police dispatch by a passerby, and the family said they were told that when the driver went by the residence the living room had already been engulfed in flames.

“We don’t bother anybody,” Amy said. “We just go to work and come home. We don’t have any enemies or anything…we were going to come back after Christmas to start repairing stuff, because we don’t have any insurance. It was added into our house payment, and once you pay it off they drop it. We just paid off the house last month.”

Banks Volunteer Fire Department was back in service at approximately 7:48 p.m. Tuesday night and confirmed that the fire had been completely put out before leaving the scene.