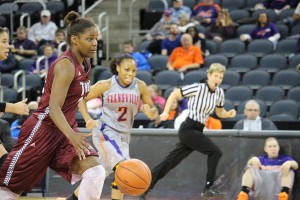 Troy University
Troy senior forward Ronita Garrett races down the court in the Trojans’ matchup against Evansville Thursday in Indiana.

It was the best offensive outing the Troy women’s basketball team has had all season.

And of the season-high 85 points the Trojans scored Thursday night at the Ford Center in Evansville, In., senior Ronita Garrett and junior Rachel Reid combined for 44 of those points.

But in the end, Troy (4-4) couldn’t keep up with non-conference opponent Evansville, losing in an offensive struggle, 94-85.

Despite 22 points, including five 3-pointers, from Reid and 20 from Garrett — who also recorded 10 rebounds in her sixth double-double of the season — the Trojan defense couldn’t keep pace with the Evansville offense.

The Purple Aces (5-4) shot 63 percent from the field in the game, led by 22 points from Sara Dickey and 20 points and 11 rebounds from Mallory Ladd.

Troy was turnover-prone in the first half, committing 12. Evansville took advantage, shooting 60 percent from the field.

After leading by as many as 26 in the first half, the Purple Aces headed into halftime with an 18-point, 53-35 lead.

In the second half, the Trojans turned the tables, forcing Evansville into turnover fits of their own.

Troy was able to chip away at Evansville’s lead in the second half, getting to within nine of the Purple Aces, but that was the closest the Trojans would come all game.

And despite forcing 10 Evansville turnovers in the final five minutes of the game, the Purple Aces continued to build their lead, shooting 67 percent from the field in the second half.

The Trojans, too, were hot from the field in the second half, shooting 48 percent, but Evansville’s first half lead proved too much for Troy to overcome.

Troy hit 3-point shots of their own, but missed far more, going 9-of-25 from the field.

The Trojans struggled to create free throw opportunities against a disciplined Evansville defense, shooting just 7-of-10 from behind the charity stripe.

Rebounding woes continued for the second-straight game for Troy, as they were outrebounded 34-33. It was just the second time this season the Trojans were held to under 40 rebounds in a game.

To go with her double-double, Garrett tallied four assists and four steals, both tops for Troy.

This is the fourth-straight win on the season for Evansville. The Purple Aces also handed Troy its first loss in the month of December.

The Trojans will return to the court Saturday to finish their non-conference schedule when they visit Tennessee State.