Submitted Article: Pike County gets off to hot start 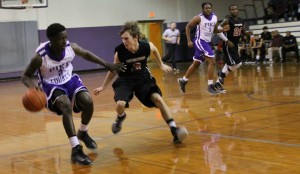 In a strong showing on Monday, the Bulldogs opened the season with a 64-46 victory over the Samson

Deshon Cowling had a great night of running the offense with 14 assists and six points. “Overall, I was

pleased with the team’s effort for our first game,” said Head Coach Doug Holland. “There is room to

The Bulldogs took the court again on Tuesday in a showdown with Cottonwood. The Bulldogs led early,

then fell behind during the latter part of the 1st quarter, down by as many as 10 points. They rallied back to

tie the game going in at halftime. The Dawgs came out on fire in the second half scoring 33 points to win

61-51. For a second night in a row, Jackson led the team in scoring with 21 points, followed by Lawson

with 15. Stevie Smiley chipped in 10 points and eight rebounds. Cowling continues to emerge as the floor

leader with 10 assists and six points. “The Bulldogs showed the ability to overcome adversity tonight

after they got behind early,” Holland said. “They were able to pull even going into the half and came out

strong in the second half. They didn’t quit, and pulled out a strong win over a good team.”

On Thursday night, the Bulldogs continued their success in the first round of the Goshen Holiday

Tournament with a big 70-39 victory over New Brockton. Smiley had a great performance in the game

points and five assists on the night. For a third consecutive outing, Jackson led the team in scoring,

putting up 23 points on the night. Michael Humphrey is beginning to emerge as a team leader, scoring 10

points and four rebounds, his best performance of the season to date. “I am impressed with our progress,”

Holland said. “We still have work to do, but the boys are playing hard, and that is all you can ask of

The boys continue play this weekend in the Goshen Holiday Tournament.