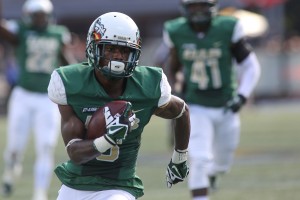 The Troy defense is continuing to bolster its back seven, this time by way of a former foe.

Farmer was a three-year starter with the Blazers before the university folded its program earlier this month. The 5-foot-11, 170-pound Pensacola, Fla., native, arrives to Troy boasting 20 career starts, including five in 2014.

“Lamarcus is a veteran player and will come in and compete immediately in our program,” Brown said in a press release. “What happened at UAB is very unfortunate and we really feel for all of the players and staff who were effected by those events. We’re glad that Lamarcus has decided to join our family and we look forward to having his experience on the field.”

The grant-in-aid agreement, which essentially serves as a one-year athletic scholarship, will make Farmer eligible for play in the 2015 season immediately.  He will be a senior next year, giving him one season of eligibility with the Trojans.

“Obviously he is an experienced guy who has played a lot of football,” Troy defensive coordinator Vic Koenning said in a press release. “Lamarcus has been a very productive player throughout his career at UAB and should give us a great jumpstart on putting together this defense.”

After walking on at UAB following his high school career at West Florida Tech, Farmer started 10 games and finished fifth on the team with 50 tackles in his first year with the Blazers

Farmer is one of three other mid-year signees Troy made this week. Linebackers William Lloyd and Justin Lucas from East Mississippi Community College and cornerback Jalen Rountree from Coffeyville Community College signed National Letters of Intent with Troy Wednesday.