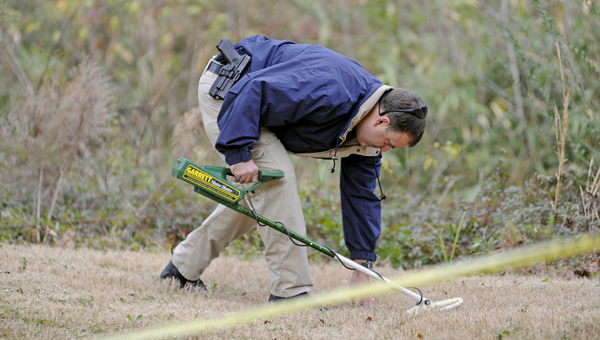 An interrupted armed robbery attempt led to an officer-involved shooting and the arrests of four suspects Thursday evening.

The incident took place around 7:20 p.m., when Troy Police responded to a report of an armed robbery at the Easy Street Apartment complex on George Wallace Drive.

“Officers arrived on the scene and made contact with the robbery suspects attempting to flee the residence,” said Lt. Bryan Weed of the TPD. “During initial contact with the armed suspects, shots were fired. No officers or suspects received any life threatening injuries.”

One suspect was shot in the leg in the incident, confirmed Alabama Law Enforcement Agency Trooper Kevin Cook. No other suspects nor officers were hit.

Cook said there was “an exchange of gunfire,” but could not confirm how many shots were fired by each party.

Dewayne A. Dunford, 32, Montgomery; Dundray C. Dunford, 20, Brundidge; Johnta L. Briggs, 30, Dothan and Dajuan D. Franklin, 18, Dothan, were arrested at the scene. Each was charged with three counts of robbery first degree and one count of burglary first degree. Their bonds were set at $400,000 each.

The robbery remains under investigation by TPD, with the Alabama Law Enforcement Agency/ State Bureau of Investigation investigating the shooting.

Reports showed the last TPD officer-involved shooting was on Dec. 9, 1988. Officers shot and killed Sidney James Byrd during a domestic disturbance call. Byrd had attacked his estranged wife Carolyn Diane Byrd at her residence on Elba Highway. Officers attempted to subdue Sidney Byrd, but he resisted and continued his attack. An officer fired two warning shots, then shot and killed Sidney Byrd after he failed to heed the warnings. A grand jury declared the shooting justifiable.