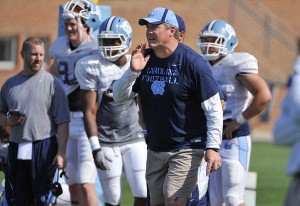 Troy University announced the hiring of another football coach Wednesday, and the name might sound familiar to Trojan fans.

“I am excited about bringing Vic back home to Troy,” head coach Neal Brown said. “He built one of the best defenses in Troy history in 2004 and still has a lot of connections in this area. Vic has been a great recruiter in south Georgia for many years, and his numbers on the defensive side of the ball speak for themselves.”

In his time with Troy, Koenning led the Trojans’ defense to national rankings of sixth in pass efficiency, eighth in rushing, 10th in scoring and 16th in total defense.

His stint at Troy was highlighted by an upset of No. 19 Missouri in the second week of the 2004 season. Koenning’s defense shutout the Tigers in the game’s final 52 minutes.

Koenning is just one of several new hires at Troy with previous ties to the program.

“I am tremendously excited to be back in Alabama,” Koenning said. “Troy has changed a lot, yet the reasons for loving it haven’t. I’m looking forward to finalizing our defensive staff and developing this team with Coach Brown and the rest of the staff.”

After leaving the Trojans in 2005, Koenning became the defensive coordinator at Clemson from 2005-2008.

In perhaps his most successful stint as a defensive coordinator, the Koenning-led Tiger defense was ranked in the top-16 nationally every year under his direction.

In 2008, Koenning’s final year with Clemson, the Tigers’ scoring defense ranked first in the ACC and ninth nationally, allowing 16.6 points a game.

Koennning moved on to Kansas State in 2009 as a co-defensive coordinator under legendary head coach Bill Snyder and served as defensive coordinator at Illinois under Ron Zook from 2010-2011. In his final year with the Illini, Koenning took the reins as interim head coach, leading Illinois to a victory over UCLA in the Kraft Fight Hunger Bowl.

“Vic brings with him a great deal of experience as he has served not only as a defensive coordinator but also as a head coach,” Brown said. “He had unprecedented success at Clemson and turned around the defenses at Kansas State and Illinois in a short period of time.”

Most recently, Koenning served as the co-defensive coordinator for North Carolina from 2012 to 2014 under head coach Larry Fedora.

In his first year, the Tar Heels’ defensive numbers improved in the second half of the 2012 season, allowing less than 20 points in five of their final six games.

But in his final season, North Carolina’s defense took a step back, including allowing a season-high 70 points to East Carolina in a 70-41 loss.

The experience was one Koenning said he took a lot away from, including how to approach a defensive unit when it’s struggling.

“Sometimes, the harder you hold on, the more you lose grip,” Koenning said. “I can’t let it eat me up like this year did.”

Koenning has already taken to the recruiting trail at Troy, and is supremely confident in the defensive roster he will inherit. He has already been instrumental in the signing of three top junior college prospects on Wednesday.

“The proof is in the pudding with the guys we signed today,” Koenning said. “The key is going to be getting players.”

For Koenning, strong defense will always come down to having, in his words, a team with character, rather than having a group of characters.

And with the coaching staff Troy has assembled thus far, Koenning has every reason to believe that with strong recruiting and stronger play, the Trojans can get back to the level of dominance he was accustomed to in 2003.

“Stats are for losers sometimes, but it does show a track record,” Koenning said. “The groups that have ended up in the top-20 or top-10 are groups that loved football. The players have to want it as bad as the coaches do.”