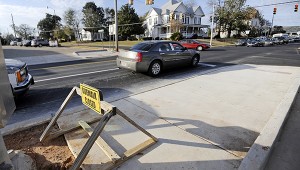 A city project, which started in late June of this year, has finally come to a close, according to city officials.

The portion of Three Notch Street, which has been closed since June 23, has officially been reopened pending the completion of a “punch list,” according to Assistant Utilities Manager for the city Mike Davis.

“Three Notch is now open to the public,” Davis said. “All we have left are some small, small items and a punch list, where will just say ‘there’s a crack in the sidewalk or there’s not been the proper amount of sod put out.’”

Construction included major improvements that helped improve flow of traffic by adding a central turn lane and widening the street, according to a previous interview with Troy Public Works Director Vaughn Daniels.

Daniels originally estimated the project would take two to three weeks, but Davis said there had been several complications causing an extended shelf life of the project. Complications from the construction included a too-old storm drain and non-ADA compliant sidewalks.

“This August we were almost finished with it for a little while,” Davis said. “We had some issues with it, and they’ve all been in the paper. There is an ADA compliance level that you have to have in order for the sidewalks to meet ADA compliance. Unfortunately, some of those sidewalks did not meet compliance.”

Davis said despite the construction setbacks, the city did not have to pay any extra to fix the sidewalks.

“We apologize for the inconveniences for those who lived on the street,” Davis said. “I believe they will be very well satisfied with the project and we look forward to hearing from them. It wasn’t any cost to the city, but it was a blow to the project fixing the sidewalks. It probably extended the life of the project of about three weeks.”

Troy Mayor Jason Reeves said he was thankful for the patience exhibited not only by Troy citizens but also of the Three Notch Street residents.

“I would like to thank the property owners and all the people that were affected by the construction for their patience” Reeves said. “There were several things that came up that caused the project to be delayed, and I’m just very thankful for the patience from the people who had to use the road and were affected by the delays. I know there were times where it was a tremendous burden for people who owned property around that area or lived in that area. We’re just thankful that we’ve come to the end of it. I think now that the work is done it will be beneficial to the city and through traffic.”