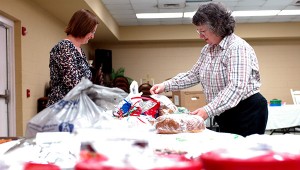 Pike Habitat for Humanity board member Karen Ross, left, helps Lyndia Dew, right, sort through cookies being donated for Pike Habitat’s giant cookie buffet, which will be held today from 8 a.m. until noon in the kitchen of the First Methodist Church. The entrance to the building is located on North Oak Street.
MESSENGER PHOTO/SCOTTIE BROWN

In hopes to put a dent in their most recent square foot campaign, Pike Habitat for Humanity will be hosting its annual cookie buffet.

Cookies were dropped off Friday in the kitchen of the First Methodist Church, downtown just off The Sqaure on North Oak Street, and while the cookies were piling up, Karen Ross, Pike Habitat board member, said those hoping to get first picks should prepare to be there when doors open at 8 a.m. Saturday.

“Our experience has been that within the first couple of hours a lot of it is gone, so for certain items you want to get here bright and early,” Ross said. “We do still have cookies all the way until closing, but certain items like the rum balls or large baked items tend to go pretty quickly. I do recommend getting here early if you know there is something you want.”

“We have every kind of cookie,” Ross said. “We have bars. We have fudge. We have breads. We’re going to have a gluten-free section and a sugar-free, low-sugar section, also. In addition to our baked items, which is all home-baked here in this area. We also have some crafts. We have decorative towels and bags and Christmas ornaments, as well.”

Cookies are being sold at $6 a pound, but larger items such as individual cakes and pies or crafts will be priced separately. While Ross hopes for a sell out, occasionally cookies are left over. Lyndia Dew, another volunteer with Pike Habitat, said any remaining cookies or items have traditionally been sold to local organizations or churches after the finish of the cookie buffet.

“The years I’ve been here, we have (had leftovers),” Dew said. “In some cases, we have taken them over to the Salvation Army, or somewhere. Some times they’ve gotten donated. Some times we’ve taken them to different churches and after church see if people will buy off the rest of them for donations. It just depends on how many are left.”

The cookie buffet will run from 8 a.m. until noon today. Pike Habitat is run off of donations, and Saturday’s fundraiser will be no different.

“Last year we had a great turnout, including people who had brought some the day before,” Ross said. “The community has been very supportive. We’re also hoping that being right downtown this time will help. We might get more foot traffic, people who maybe didn’t know about it.”