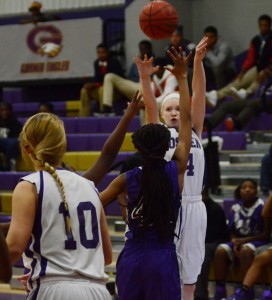 In a back-and-forth game that featured five lead changes in the final quarter, the Goshen Eagles fought their way to a dramatic 41-34 victory Friday night over Pike County in the second round of the Goshen Holiday Tournament.

With the win, the Eagles advance to the tournament’s championship game Saturday.

Goshen came out playing inspired basketball Friday, jumping out to a 10-6 first quarter lead behind four points each from Bre Griffin and Shyanne Tillery.

But Pike County fought back, outscoring the Eagles 16-7 in the second, aided in part by Goshen turnovers created by the Bulldogs’ full-court press.

Precious Vaznaian led the Bulldogs offensively in the second quarter with eight points, including two 3-pointers.

After a fast start to the game, the Eagles entered halftime finding themselves down 22-17.

In the third quarter, each defense settled down and each team’s offense went cold.

The first basket of the second half  didn’t come until 4:42 of the third quarter.

But Goshen’s Shamiya Griffin got the Eagles on the board late in the quarter with a jumper.

And in the fourth quarter, Goshen added to the game’s dramatics, going on a late-game 8-2 run, something that has been characteristic of them throughout the tournament.

After trading leads for the first few minutes of the final quarter, Bre sunk two free throws and two jumpers to extend the Eagles’ lead to four with two minutes to go.

In the end, Pike County couldn’t hold on to their second-half lead, as Goshen outscored them 14-4 in the final quarter.

“It wasn’t an easy game, and Pike County played well as always,” Damar said. “But we fought. That’s the key thing is we fought. Right now, it is a good win. We have more work to do. I’m not happy until we get a championship.”

Bre finished with 14 points for the Eagles.

Vaznaian led the Bulldogs with 11 points.

Goshen will return to the court Saturday at 4:30 p.m.