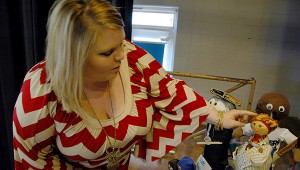 Sixth grade teacher Cody Carnley shows off some of her student’s work. Students were asked to create a “biography bottle” to represent a famous man or woman they studied.
MESSENGER PHOTO/SCOTTIE BROWN

There are certain times of year where student’s thoughts drift far away from their schoolwork, and Christmas time seems to be one of those.

Sixth grade teacher at Goshen Elementary Cody Carnley got the idea for her students to build “biography bottles” from Pinterest and after seeing the results from this last week’s presentations, she’s thrilled with the turnout.

“We really wanted to show the kids is that there is a positive side to a lot of hard work,” Carnley said. “When you go out and you research not only do you see that some times the information is not the same, so you have to see what information is factual. But, they also saw that you read to learn. It was about reading to learn something that you didn’t already know.”

According to Carnley, students were to pick a book focusing on an important person in history who interested them. After picking their figures, students used class time to research the person a write a one-page report on what they had learned. While the details of the project seem simple enough, Carnley had her students create bottles in the person’s image.

Students were instructed to use materials found around the house, and Carnley said this was a way for her to see just how creative her students could be when it came to making the bottles as true to character as possible.

“I wanted the kids to be creative to see what they had at home without going out to buy things,” Carnley said. “The kids who used the hosiery on their heads, they said they didn’t have anything else so they just used an old pair of pantyhose. A lot of them didn’t go out and buy stuff.”

Tessa Suell a student in Carnely’s class, chose to research and learn about Frederick Banting, the discoverer of insulin. Suell was recently diagnosed with diabetes and said it had been eye-opening to her to learn about the man who was saving her life every day.

“He created what keeps me alive every day,” Suell said. “He had grown very interested in Diabetes, because no one really knew any cure or anything to treat it. They knew that diabetics didn’t have insulin…Once got it, he sold the patent to the university for $1. He wanted it to be as cheap as it could be to get it.”

Students presented their projects during the latter portion of the week, and Carnley said it was a great experience for her as a teacher to see her students retaining information that they had learned on their own.

“It’s a very heartwarming feeling to know that they are comprehending,” Carnley said. “All the strategies that we’re doing in the classrooms are working for them. They are retaining information that’s not coming from us. This was something they had to do on their own. There was very little input from us, so they can read text that’s not necessarily on their grade level and understand what they text is saying. It makes you happy.”