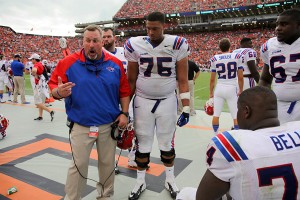 Troy Athletics
After three years at Tulane University as an assistant head coach and offensive line coach, Matt Moore will join the Trojans as a co-offensive coordinator.

“Matt has been a winner everywhere he has been and is a great addition to our coaching staff,” Brown said. “He was part of our first Sun Belt title here in 2006, and we worked together at Texas Tech where we put up some big offensive numbers. Throughout his career, Matt has had the ability to develop an offensive line and has always had a great demeanor with his players.

Brown and Moore are familiar with one another, as they coached together at Troy in 2006 and at Texas Tech in 2010 and 2011 as offensive coordinator and offensive line coach, respectively.

Not only is Moore looking forward to coaching with Brown again, but he also said he is ready to be a part of the Troy program again

“I’m excited to get back to the Troy family,” Moore said. “This (first time at Troy) was eight years ago and we still keep up with our friends that we made then.”

Although he has never coached with Edenfield before, Moore said he knows his offensive counterpart well. The two coaches have talked extensively in the past, including the possibility of one day coaching together, something that is now a reality.

“I know Kenny (Edenfield),” Moore said. “We crossed all kinds of paths several times. He and I talked several times about coming here (to Troy), but it never worked out. I feel really good about the staff that coach Brown has put in place.”

As for the specifics of his new position at Troy and how the dynamic will work with he and Edenfield serving as co-offensive coordinators, Moore is unsure at this point.

One thing Moore does know for certain, though, is that he will have high expectations from Brown, a coach Moore referred to as one of the hardest working head coaches in America, something he noticed immediately when he first me Brown.

And from the looks of things, Brown’s work ethic has already rubbed off on Moore, who wasted no time getting to work after accepting the job at Troy.

“I got in at 6 a.m., got a pullover and hit the road recruiting,” Moore said.