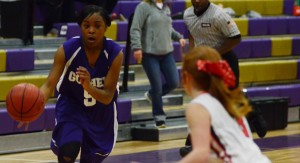 Bre Griffin scored 10 points, including six in the fourth quarter, and the Goshen girls fought off a Zion Chapel second-half comeback as the Eagles downed the Rebels 38-28 Thursday night in the opening round of the Goshen Holiday Tournament.

Coming off of a tough loss to Luverne on Tuesday that saw their offense stagnate for most of the game, Goshen came out playing aggressively, taking advantage of early Zion Chapel turnovers as the Eagles raced out to an 8-2 lead.

But early in the second quarter, the Goshen offense froze up, and Zion Chapel took advantage.

The Rebels outscored the Eagles 10-7 in the second quarter behind four points from Sarah Killingsworth.

The Eagles, who had opportunities at the free throw line in the second quarter, went just 1-of-4 from the charity stripe as they went into the locker room up 15-12.

“We got a little uneasy at times,” Goshen head coach Ashley Damar said.

Coming into the second half, Goshen’s defense clamped down early on the Zion Chapel offense. But the Eagles, who scored just four points in the third quarter, couldn’t get their own shots to fall despite having good looks at the basket.

And at 7:00 of the fourth quarter Zion Chapel’s Angel Flower hit a 3-pointer, giving the Rebels their first lead of the game.

But the Eagles stormed back, going on a 16-5 run to close out the game including a Jada Hall 3-pointer that iced the game with under 30 seconds to go in the game.

“They’re a young team and they’re still making mistakes, but the fact is that they jelled together and they fought through,” Damar said. “We just have to put it all together…it’s just like a brick. Brick by brick we are going to build our house.”

Goshen will meet Pike County tomorrow at 3:30 p.m. in the second round of the tournament.