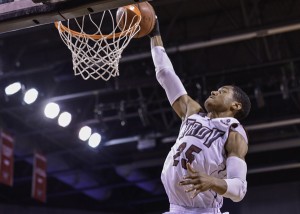 After a shaky 1-3 start to their regular season, Troy men’s basketball is heating up.

Fresh off a second-straight double-digit win over Central Arkansas, the Trojans will look to remain undefeated in the month of December when they travel to Dothan, Ala., Thursday for a nonconference matchup with Fort Valley State.

Thomas has now recorded back-to-back double-doubles twice in his college career and is ranked seventh nationally and first in the Sun Belt in rebounding with 4.5 offensive rebounds per game. He is also shooting 66 percent from the field, good for eighth in the country and second in the Sun Belt.

Troy freshman Wesley Person has scored in double digits in each of the Trojans’ 6 games this year, with a season-high 27 points against Ole Miss. Person will look to continue his streak Thursday.

And if history is any indication, Person, a Brantley, Ala., native, will have no problem doing just that.

The Trojans will meet a slumping Fort Valley State who is coming off of a 95-75 loss at Columbus State.

The Wildcats (0-7) are lead by Tyrone Brison, who finished with 21 points in Fort Valley State’s losing effort to Columbus State.

The start to the Wildcats’ season is an unexpected one, as they finished first in the Southern Intercollegiate Athletic Conference with a 21-9 overall record just one season ago.

The Wildcats have been sputtering offensively up to this point in the season, averaging just 59.3 points a game.