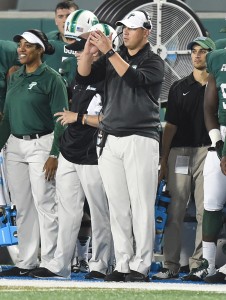 Just one week after being announced the new head football coach at Troy, Neal Brown has quickly begun assembling his staff.

Sumrall, who will join Troy after serving the last three seasons as co-defensive coordinator at Tulane, will also be a defensive assistant at Troy.

The Hunstville, Ala., native was responsible for a stout Tulane defense that helped the Green Wave to their New Orleans Bowl berth in 2013. It was the team’s first bowl appearance since 2002.

“Jon is an up-and-comer in the profession and I have followed his career closely,” Brown said. “I’ve known him since 2000 when he was recruited at Kentucky and then he was a graduate assistant at UK for my high school coach, Chuck Smith, who I have the highest respect for. Jon has been a coordinator at the FBS level and led a huge turnaround at Tulane. He is a perfect fit for our staff being an Alabama native and is a relentless recruiter. I am excited that Jon is going to be part of what we are building at Troy.”

Sumrall’s defense at Tulane received national acclaim in his three years at the helm.

The Green Wave defense proved opportunistic, finishing second in the nation with 35 forced turnovers in 2013 including 16 fumble recoveries and 19 interceptions.

In addition to serving as co-defensive coordinator at Tulane, Sumrall also coached the defensive line in 2012 and 2013 and linebackers in 2014.

Prior to his stint at Tulane, Sumrall was a defensive assistant at the University of San Diego, serving in several different roles before taking the reins of the Toreros’ defense in 2010.

Prior to his coaching career, Sumrall played middle linebacker at the University of Kentucky, where he was a three-time letterman from 2002-2004.

Sumrall was being recruited by Kentucky as Brown finished his playing career at wide receiver for the Wildcats in 2000.

After graduating, Sumrall went on to work as a defensive graduate assistant at Kentucky from 2005-2006. While with the Wildcats, he coached linebackers and the secondary.

“This is an outstanding opportunity, and I am extremely excited to join the Neal Brown’s staff at Troy University,” Sumrall said. “Troy has a rich football history, and I’m ready to get to work to bring championships back to Troy.”