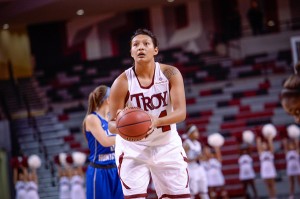 Ramirez is coming off of a season-high 21 point outing one week ago against Samford. The Shawnee, Okla., native gave the Trojans solid numbers coming off the bench, including three 3-pointers in the Trojans’ 76-67 win over the Bulldogs.

Ramirez’s offensive output helped the Trojans stave off several second-half Samford comeback attempts in their defeat of a Bulldog team who one game before knocked off the reigning Big 10 champion in Penn State.

After scoring just 17 points in the Trojans’ first five games combined, Ramirez shot 8-of-13 from the field and 3-of-5 from behind the arc in the game.

The transfer from Tyler Junior College, Ramirez was ranked as the nation’s No. 16 overall junior college prospect — No. 4 power forward — last season by Dan Olsen’s Collegiate Girl’s Basketball Report, per the university.

On Monday, Ramirez was also named the College Sports Madness Sun Belt Player of the Week.

This is the first conference honor for Ramirez, and the first for Troy since Joanna Harden one season ago.

Troy will return to the court Saturday when they host Alabama state.