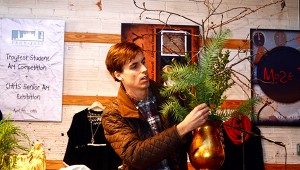 The campaign will continue through Dec. 24, and according to Pike County Salvation Army Director Kim May, is the biggest fundraiser for the Salvation Army.

May, who has worked with Pike County’s Salvation Army hub for the last eight years, was the first of three speakers at Female Factor on Dec. 10.

“You wouldn’t think that there would be people right here in Pike County that need food everyday,” May said. The money donated inside these kettles help feed hungry families throughout the year.

Salvation Army ringers are stationed at Walmart, Food World, Piggly Wiggly on 231 and Walgreens. Stools are provided for ringers who may not be able to stand for a full two-hour shift.

“The Salvation Army believes that the Red Kettle is a gift from God,” May said.

The Salvation Army is currently accepting donations in the forms of money or goods. According to May, the greatest need this season is blankets, coats and any other item that can help someone stay warm. Also, protein items are needed for the food bank, with the exception of peanut butter.

In other news at the meeting, Pink Parlor announced it will be taking a “different direction” in 2015, according to owner Juliette Adams. As Adams demonstrated how to mix and match different clothing items, she excitedly announced that Pink Parlor will be carrying more “fully figured” sizes up to 3X.

“Everybody thinks if you are bigger than [large] that you can’t look cute,” Adams said. “Well, that isn’t true. You can look cute no matter what size you are.”

The outfits were “fresh and fabulous” according to Karen Herring, marketing director at Troy Regional Medical Center.

Female Factor meets downtown at The Studio every first Wednesday every month at noon.