Christmas Cheer: Farrow looks back on playing the role of Santa Clause in the Troy City Christmas parade during his college years in 1968 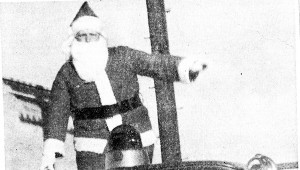 Each year, the City of Troy hosts the Christmas parade. Scenes of winter wonderlands and Christmas joy flood the streets as the community bundles up and watches it all go by. The parade is a treasured memory for all, especially the ones participating.

On December 4, 1968, Charles Farrow put on the big red suit and played as one of Santa’s helpers in the Troy Christmas parade. He remembers riding on top of the fire truck, tossing candy to the smiling children lining the streets.

“Sometimes they would throw the candy back or throw rocks at you,” Farrow said.

“I was a Troy State College student back in those days majoring in Fun and Delta Chi Fraternity,” Farrow continued. Actually, he was a business and marketing student, and his 50-year reunion is coming up in May 2015.

“I wasn’t an old Santa,” Farrow said. He said he was around 20 years old at the time. “It was part of my growing up in Troy as a college.”

Farrow recalls already having the Santa suit before he was scheduled to be in the parade. Because who doesn’t just buy a Santa suit for the heck of it?

He said he bought it “just to play Santa somewhere, I reckon.” He remembers buying the suit and going to get it altered. When he brought it in, the lady altering it said that it was the biggest Santa suit she had ever seen.

“You had to be a fat man,” Farrow laughed, proud of his Santa-ness. He ended up being Santa in the Christmas parade for 2-3 years.

“It was something I’d never done,” Farrow said.

Not only was he the Santa in the parade, he also served as Santa for young girls at a local dance studio. He remembers attending their Christmas party and letting the girls sit in his lap, telling him what they wanted under their trees on Christmas morning.

Originally from Eclectic, Ala., Farrow is now retired and lives in Montgomery and runs a company in Eclectic called Majestic Trading Company. He visits Troy for the homecoming games to visit with his fraternity brothers.

It was clear why Farrow made such a great Santa back in the 60s. That jolly Christmas spirit spilled out of him as he revisited those days in the Troy Christmas parade. No matter how long it’s been, some things just never change.

“I reckon I helped society somewhere along the way,” Farrow said. “I have had the opportunity to make a difference in many people’s lives from playing Santa.”