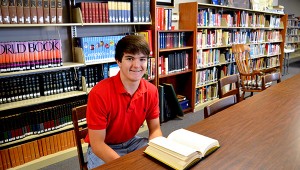 Messenger Photo/NGOC VO
John Hayes Lee, a Pike Liberal Arts junior,has remained positive throughout his high school career. Lee feels this is what has set him a part from other students over the course of the last few years.

John Hayes Lee, a junior at Pike Liberal Arts High School, said he believed his positive attitude was an important trait which has set a part from other students.

His quote to go by is one from Charles Swindoll, which says, “Life is 10 percent what happens to you, and 90 percent how you react to it.”

Lee said he has used this particular quote to shape his life and the way he has been living it to date.

“I try to live my life the most positive way I can and react the best way I can to given situations,” he said. “It applies to every little thing in my daily life.”

According to Lee, he joined several different school clubs and extracurricular activities so he could support his organizations and help others.

“I enjoy being a leader in my school,” Lee said. “I’m passionate about supporting others to help lead them on the right path. The opportunity to reach out is a major reason why I’m in various clubs and organizations.”

Lee is the treasurer of the Pike Liberal Arts SGA and vice president of the school’s Excel Club. Lee said the two organizations were involved with community service projects such as helping victims of child abuse, Salvation Army’s Red Kettle Campaign and Operation Christmas Child.

Lee is also an active member at Park Memorial Church and in Southside Baptist Church’s youth program. Lee said his drive in life was to be helpful to those in need and to become somebody other people look up to as a role model.

Besides being involved in multiple extracurricular activities, Lee is also an example of a student athlete with the ability to balance both school and athletics well. Lee competes on the Patriots’ football, basketball and baseball teams.

Lee was one of the first members of Calculus club, which is only open for students taking calculus in the advanced diploma program, and he is a part of Pike Lib Robotic team, which placed seventh overall in the regional Robotic competition last month in Ozark.

Lee said he was attempting to become multi-lingual speaking English, a little Spanish and Mandarin and has enjoyed exposing himself to new ideas with the different cultures. Lee said his most significant academic experience for had been the summer academy he attended at Duke University.

“The classes were very intellectual and entertaining,” he said. “I met a lot of people from all over the world. I felt like I learned to be open to different mindsets and options because people have different kinds of government and values. It’s interesting to see the world from their perspectives.”

Lee said he has been interested in Auburn University’s engineering program but had not made any definite choice as to which college he is going to attend. What he looked for in a university, he said, was the organizations and the opportunities available to him outside of his schoolwork.