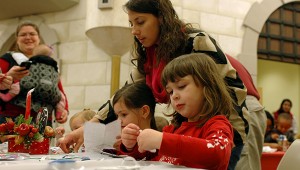 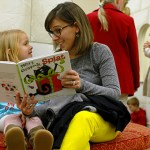 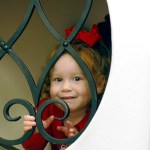 Molli Kate Johnson plays in the carriage in the children’s section of TPL. MESSENGER PHOTO/SCOTTIE BROWN 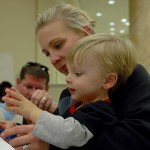 What was supposed to be “Story time with Santa,” quickly became a time for parents to make crafts with their children and spend time reading to them as the library filled with every member of the family.

Teresa Colvin, Children’s Librarian with Troy Public Library, said she was thankful she, and all of the volunteers, was able to accommodate all of the children and families who came to see Santa Tuesday evening.

“They usually come, trinkle in all during the night,” Colvin said. “They come in sporadically through the night, but tonight, as soon as 5:30 p.m. hit, they were here before the program started. We just went ahead and started seeing the kids early, and they started making crafts.”

Ebony Aelterman has been bringing her daughter, Sofia, and son, Edward, to have their pictures made with Santa for the last six years. Aelterman said the library’s program was a great opportunity for parents to spend time with their children and watch them interact with Santa.

“Two years ago, my daughter was finally not afraid to sit on Santa’s lap,” Aelterman said. “When she was a baby, she didn’t know any better. Then, as she got older and could recognize people in costumes, she was always very afraid. When she was three, she took it all by herself. She was in her ballet costume and sat on his lap with a big smile. That was my favorite part for me.”

Tuesday’s program was geared toward children under the age of 11, and Aelterman said her daughter and son both still believed in the magic Christmas brings every season.

“The kids are excited to see Santa,” Aelterman said. “They’re still young enough to believe that he takes time off from making toys in December to come and hear their wish list, which I have with me.”

Although the amount of children was overwhelming, Colvin said she was thankful for the time volunteers and staff members had taken to help make this year’s program so successful.