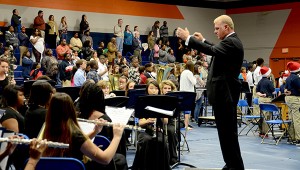 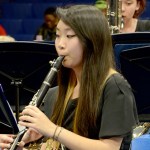 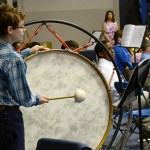 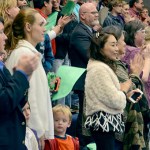 The audience gave a standing ovation to the bands that performed at A Christmas Gala Concert. MESSEGNER PHOTO/COURNTEY PATTERSON

Troy students of all ages gathered at Charles Henderson High School on Monday to put on the annual “A Christmas Gala Concert.” What says “Christmas cheer” more than elementary students wearing Santa hats and playing the xylophone?

Bands from each school in Troy were able to showcase their work for parents, friends and the community. This year, the Orff Ensemble, a percussion ensemble directed by Elaine Blocher from Troy Elementary School, joined the concert.

Charles Henderson High School Principal Dr. Boyd English said the concert is not only a way to “usher in the holidays,” but also a way for parents to see what students have been working on throughout the year and shows how strong the band program is and the investment made in the band program.

“It’s great to see so many people involved in the arts,” English said.

“I think it went really great,” said Alexandria Thomas, a member of the high school concert band. “[The band is] a family that can never really be replaced.”

Each level of learning was displayed during Monday’s performance. The bands included players from the Beginning Band, Intermediate Band, Advanced Band, Concert Band and the Orff Ensemble.

The concert consisted of only instrumental pieces, due to the fact that the choir director, Kathy Lightfoot, is in the hospital.

At the conclusion of Monday’s concert, the concert band played a special treat for the audience. The final piece was a blend of songs from Disney favorite, Frozen. The other bands, and even some members of the audience, joined in to sing the songs as the band played.

“We normally do traditional Christmas tunes,” said Trent Burkett, director of bands. “The students are the ones that really pushed to play it. It was a stretch, but it was a learning experience.”