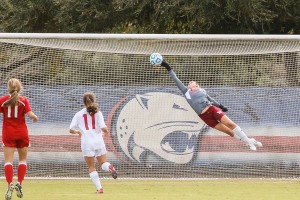 Troy University soccer’s magical season may have come to an end last month, but the honors keep on rolling in for Trojan players.

Jones, who set new Troy single-season records in shots (95), points (34), game-winning goals (7) and single-game shots (11), was named to the first team. She is the first Trojan player ever to earn a first team selection. The Mustang, Okla., native finished the 2014 season with 12 goals and 10 assists.

Lewis earned second team honors after a freshman season that saw her post a Sun Belt-high 11 shutouts this season. Her 16 wins, 0.81 goals against average and shutout total are all school records. Lewis, like Jones, is the only Trojan to ever be named to the NSCAA second team.

The record-setting play of Jones and Lewis in 2014 helped Troy navigate their best soccer season in school history. The Trojans smashed several individual, team and career soccer records last season on their way to a school-best 16-6 record, good for second place in the Sun Belt division. The Trojans finished off their regular season by shutting out seven straight opponents.

The historic run continued as the Trojans went on the play in the Sun Belt conference championship game for the first time ever in school history, where they fell to host team South Alabama 1-0.

The Trojans were lead by first-year head coach Jason Hamilton.