Full Honors: Zion Chapel SGA president says drive to be more involved and make a difference pushed him to run for president 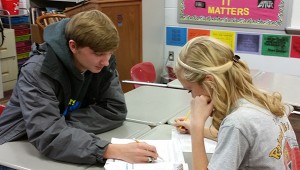 Submitted photo
Left, Joshua Simmon, from Zion Chapel High School, spends time during his afternoons tutoring math for other students, such as Brooklyn Norris, right. Simmons is the president of ZCHS’ Student Government Association and a member of the school marching band. He is driven to push himself to do better and achieve more.

Joshua Simmons, Zion Chapel High School SGA president, chose “driven, creative and happy” as the three words to describe himself.
Simmons was driven to be a part of the school SGA in his junior year and this year, he was elected to be the president.
“I decided to join because I wanted to be more involved with my school, more active in the community and to provide a voice for the student body,” Simmons said.
Simmons’ responsibilities as an SGA president are to oversee the group’s meetings and make action plans for various fundraisers and activities, he said. Organizing homecoming and Relay for Life, among other major school events, gives him an opportunity to be creative.
“I just enjoy being able to formulate ideas, to express myself and to come up with new things,” he said.
Simmons is a member of Zion Chapel Senior Beta Club, a group for students who maintain a high GPA with focus on community service.
“We are holding a canned food drive and a Christmas party near the holiday season,” Simmons said. “The party is for underprivileged children in the school. We will serve food as well as give out gifts including clothing and toys.”
Simmons is an Academic Ambassador for the school and is also involved in Math Club, which goes to two math competitions every year. Moreover, he plays the saxophone in the Zion Chapel Rebel Band. He has been playing the instrument for seven years.
Despite his commitment to multiple groups, he does not have a schedule burden and greatly enjoys his involvement, Simmons said. He balances school work and his other responsibilities well and is happy about what he has done.
“It is a great experience and an opportunity for me to meet a lot of people,” Simmons said. “The most rewarding thing to me is being able to say that I represent the student body and knowing that students can come up to me and tell me their problems.”
Simmons’ top universities to attend after his graduation are University of Alabama Birmingham, Troy University and University of South Alabama.
“I really enjoy the atmosphere and the biology/pre-medical programs (at those schools),” he said.
“I’m excited to go to college, to the next stage in my life. I will miss the small school atmosphere where I feel important because I’m able to do something for the school and for the students.”
Simmons said even though he is a bit anxious of the unknown future, he is still driven for bigger accomplishments.
“I would enjoy being involved in the clubs offered in a university to keep pushing myself to go above and beyond,” he said. “I would be interested in SGA in college. I wouldn’t let the opportunity pass me.”