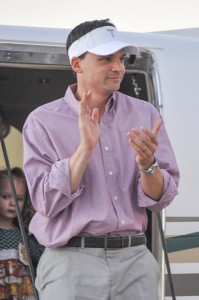 Newly announced Troy Head Coach Neal Brown steps from the plane Sunday afternoon at the Troy Municipal Airport. Brown was officially announced as the replacement for the retiring Larry Blakeney earlier Sunday. Brown comes to Troy from the University of Kentucky, where he served as offensive coordinator for the past two seasons. (Troy Messenger/Joey Meredith) 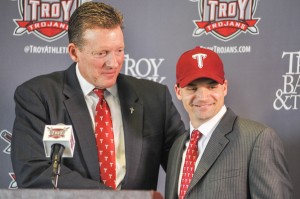 It was just like the prodigal son was returning home.
After going out into the world, learning, teaching and honing his craft, he was back to show everyone what he could do.
And when the Sound of the South struck up the Troy fight song and the nearly 200 in attendance took to their feet Monday morning, Neal Brown, just announced the new head football coach at Troy University, was home.
“Welcome to Troy,” fans yelled to Brown Sunday evening when his plane landed in Troy.
Brown quickly corrected them.
“Welcome back to Troy.”
Brown, who agreed to a contract of four years at $660,000 per year with a fifth-year option with Troy this past weekend, served as an offensive assistant at Troy from 2006-2007 and an offensive coordinator for the Trojans in 2008 and 2009.
He left Troy in 2009 for an offensive coordinator job at Texas Tech, and later, an offensive coordinator position at Kentucky.
But in the back of his mind, Brown always knew he would return to lead the Trojans one day. To him, Troy truly was his home, in a sense. This is where his coaching career really took off.
“When I saw Larry Blakeney step down, I knew I wanted this job,” Brown said. “I have a lot of great memories, first of all, on a personal level. It was the first place Brooke and I — my wife — moved when we got married so this was our first home…On a professional note, Coach Blakeney hired me when I was 25 to be a Division 1 football coach. I’m really grateful for that opportunity. Troy has been successful. I’m a big believer in schools that have tradition, and this place has tradition.”
For Troy athletic director John Hartwell, Brown was a slam-dunk hire. He fit every criteria that Hartwell not only looked for, but demanded out of the next head coach to lead Troy. Hartwell said Brown was a “recruiting machine,” has a proven track record of accountability and discipline and was “the fit” for Troy.
So confident was Hartwell in the new hire that he put every other college football team in the nation on alert.
“It’s going to happen with this guy (Brown) right here,” Hartwell said. “They’re going to talk about Troy football in the same breath as Boise (State) or Northern Illinois. They’re going to say, ‘we don’t want to play them, because they are going to kick our tails.’”
But being the head coach of Troy is not all about winning for Brown. He reiterated several times Monday that the development of players into young men was the foremost priority of the program.
“We develop young men; that’s our job,” Brown said. “We are going to be a players-first program…I’m focused on getting it right more than I am getting it done.”
To add to the dedication to character development, Brown said he would also put programs in place to aid players’ physical development such as sports science and nutrition programs.
“That (a nutrition program) is something that is vitally needed,” Brown said.” John (Hartwell) and I are in continuous conversation about that. Hopefully we’ll have a plan in place when the kids get back here in January to start the spring semester.”
And on the football field, fans can expect a show.
In Brown’s last year as the offensive coordinator at Troy, the Trojans ranked third nationally in total offense. And in his stints at Texas Tech and Kentucky, the offenses improved immediately in Brown’s first years.
“Our offense will be exciting,” Brown said. “We plan on getting players in open spaces and making guys miss.”
For Brown, the goal is simple: return Troy to the prestige that it once enjoyed years ago.
The consecutive conference titles, the packed stadium on game day. It’s all part of the Neal Brown plan.
“We’ve got to get back to where we play with the edge,” Brown said. “When we won conference championships. Let’s make Veterans Stadium the toughest place to play in the Sun Belt Conference.”