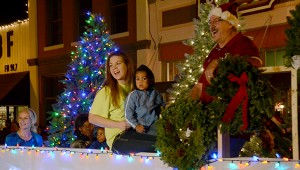 Mayor Jason Reeves said in his 19 years of coming to the parade this year’s seemed to have the best community turnout.
MESSENGER PHOTO/SCOTTIE BROWN 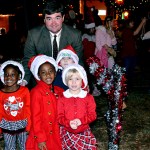 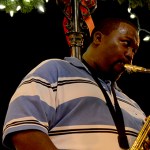 Although unseasonably warm, the City of Troy ushered in the Christmas season with its annual Christmas Parade and tree lighting ceremony, which followed close behind the conclusion of this year’s parade.

Troy Mayor Jason Reeves, who said this year marked his nineteenth parade, was impressed with community involvement from both parade entries and members of the community who came out to show their support and enjoy the show Monday.

“I think this is probably, one of, if not the, largest crowds we’ve had for this event,” Reeves said. “I think the downtown area has been very active this Christmas season, the entire community has. I think the crowd here is a reflection of that hard work. This is what is so great about living in a small community.”

“We’ve got right at 100 entries,” Jackson said. “I think it’s great for the community. We’re all about community, so to have this many people come out and participate in the parade from Banks, Brundidge and Troy. It’s just bringing the community together. It’s a wonderful day to be a Trojan.”

Reeves cited having Troy University students on campus the largest impact to the amount of participation and support the parade has received over the years, and Jackson agreed. Haley White, along with several other Delta sorority members from the university, volunteered at Monday’s parade dressing as elves, presents and even a snowman to take pictures with children at the parade. White said the group had chosen to volunteer as a way to give back to the community.

“It means a lot for us,” White said. “We like to do things with the community because it shows we do like to be active and we do like to help out around the town. We love to be able to help out with children in any way that we can.”