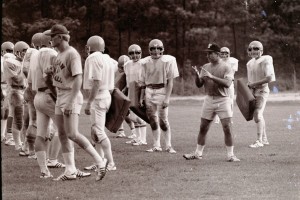 Jeffcoat was a part of two championship teams in Troy. Once at Charles Henderson and one at Troy University.

Jeffcoat, who was a staple in the Troy sports community dating  back to the 70s, was known for leading Charles Henderson to the only state title in the school’s history in 1980 and was a member of the coaching staff on Troy University’s 1984 national championship football team, among other accomplishments.

Dan Smith, former sports editor for The Messenger, covered Jeffcoat during the Trojans’ 1984 title run and remembered him fondly.

“He was of course extremely well respected as an offensive football mind, leading Charles Henderson to their only state championship in football in 1980 and also he was the offensive coordinator for the 1984 (Troy) national championship team,” Smith said. “More importantly, he was one of the strongest Christian men that I have ever known. And in that position as a head coach in high school and offensive coordinator in college, he touched a lot of lives and was extremely well respected by the players and coaches and fans. He was a great man.”

During the Trojans’ 1984 season, Jeffcoat’s wishbone offense was among the most productive offenses in the Gulf South Conference.

But his imprint on Troy athletics will surely endure several lifetimes.