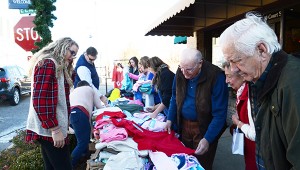 People go through a sales table in front of Cotton Creek, which included several sales and specials on Black Friday. Many stores in on The Square offered deals to encourage customers to shop locally. Vendors also made an effort to give customers quality customer service to ensure a pleasant shopping experience for their customers.
MESSENGER PHOTO/NGOC VO

On the biggest day of the year for shopping, people look for various items from clothing items to electronics, but unlike any other day of the year, shoppers have great deals in mind when hopping from store to store.

Shopping for her husband, brother and son at Cotton Creek, Janet Maddox said she very much enjoyed Black Friday.

“It’s fun to shop in Troy where it’s safe, and I enjoy seeing my neighbors,” Maddox said. “I definitely got a good deal and it’s not a stressful shopping experience. I got wonderful bargains on quality merchandise.”

Cotton Creek was busy with customers both in and outside of the store, which featured items up to 75 percent off.

“I was looking for Christmas gifts for my boyfriend and the good deals (at Cotton Creek) were what attracted me to the store,” said Savanah Hollis.

Others shoppers opted for bigger stores over the convenience and items small businesses did not carry. C.B. Webb, a shopper at Walmart was satisfied with his 40’’ Samsung television purchase following his Black Friday shopping experience.

“Smart people go shopping today,” Webb said. “I got the television for a fairly good deal. I may get the same thing for a better price in BestBuy, or somewhere like that, but Walmart is much closer.”

Webb said he came shopping for Black Friday sales at 8:40 a.m. and did not have to wait in line.

However, Walmart’s Black Friday sale opened earlier and was packed with customers. Erick Haistings said he was at the sale at 2 a.m. and had to wait in line for three hours for an RCA 7 tablet.

“It’s was very hectic lining up with people going in circles and yelling,” Haistings said. “I kind of like the rush of it though. The line packed up to around the corner of the building. There were people parking all the way over in the gas station’s parking lot.

“I think it was worth the wait, because I was not doing anything, anyway. I am willing to stay in line for something that is much cheaper.”

GameStop also opened early and received a great turn out. The store began its sale at midnight Thursday and there were people already waiting in line for the opening.

“We had an initial rush for about an hour,” said Derek Daniel. “The number of customers then died out and usually would pick up again around 9:30 to 10 a.m. Friday morning.”

The most popular items customers were looking for in the store were the new games on sale, as well as the console bundle deals, Daniel said. The majority of the specials will go on until Sunday, ending the first wave of the store’s holiday sales.

Shoppers enjoyed a variety of choices across the county, not only in products but also in stores on Black Friday. Some showed a preference for private businesses versus bigger retailers.

“I like shopping at small boutiques more than at big department stores,” said Shelby Richburg. “The price seems a bit better, and the style is more fitted to what I want. I figure the line is a bit shorter here. I’m not a very competitive shopper.”

Richburg said she is shopping for Christmas presents, and her shopping experience which started at 8:30 a.m. Black Friday, had been a bit hectic, but not too bad, overall.

While some shoppers had certain deals in mind for their Black Friday shopping, others enjoyed the experience without having their an eye on specific products.

“I’m just browsing for nothing in particular,” said Susan Holiday. “I didn’t know I was going to shop until 6 a.m. today, but I have found some great deals at Glow.”

Glow was packed with customers rushing for deals. The store offered up to 90 percent off on select items.

“When we opened this morning at 8 a.m., we had a line outside almost past the antique store,” said Glow’s owner, Julie Sanders. “It’s a bit chaotic, but I think customers enjoy shopping very much. Our Black Friday deals are always big, with jewelry up to 30 percent with no exclusions.”

“This year we haven’t had as many customers, because we were open on Thanksgiving, so fewer people would be coming Friday,” Johnson said. “It was proved last year that the increase of the sale was worth the early opening, serving people with their demand.”

Johnson said the store’s deals would last until closing on Saturday.

For Walgreens, the busy time for shopping was Thanksgiving Day between 1 p.m. and 3 p.m., according to Kayla East, the store sale associate. The store served 150 customers on Thursday. The most popular items bought were children’s toys with Walgreen’s 50 percent discount, East said.