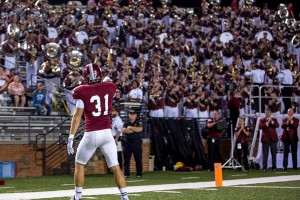 Tyler Parker remembers when he would sit in the Troy press box on game days, staring out onto the field and wondering what it would be like to don the Trojan logo.
At the time, Parker, a graduate of Brewer High School and former quarterback for the Patriots, was a Troy student, working as the internal public address announcer.
But as games went by and the lure of playing college football grew and grew, he knew he would have to make a decision — remain in the press box for the rest of his college career, or entertain that inner voice telling him to follow his dream and tryout for the Troy football team.
It was a no-brainer.
“I decided I wanted to play football because it’s something I’m passionate about and I care about a lot,” Parker said. “I know a lot of guys on the team and I cared about them. I decided I wanted to walk-on.”
So that was that.
Parker tried out for the team and joined the Trojans in 2011.

For the fall of that year, Parker was a practice squad player. He didn’t dress for games and continued to work in the press box on game days for the remainder of the 2011 season.
But in the spring of 2012, the university made a discovery. Technically, Parker was an NCAA violation. He was playing for Troy, but was also being paid for his media relations job on game days.
Now, he had to make another decision. And even though some close to him thought it was a bad idea, Parker went with his gut. He would quit his job with Troy to focus on football. But because of NCAA rules, Parker was suspended from the team for all of spring practice, so he wouldn’t have to officially declare until the fall.
But still, after six more months to think about it, his answer remained unchanged.
“My dad was like, ‘If you were a starter, I’d understand, but you’re on the bench,’” Parker said. “It was easy. ‘Sorry, mom and dad, but I’m going to have to apply for other scholarships. We’re going to have to take out some grants or loans.’ I dropped the media relations scholarship to play football.”
From there, Parker, now a senior entering his final game as a Trojan Saturday, fought and clawed his way to move up on the depth chart.
In his determination to get any edge that he could, he used his prior media relations access to get in the weight room and on the field for some extra late-night training.
“I kind of used my media relations job as a way in,” Parker said. “ After games and meetings and stuff up here, it would be night time or early in the morning, or on the weekend when the weight room was closed. I would go down the stairwell into the weight room and work out. I’d look at the board and see what the team had done that day. I’m pretty sure it would be frowned upon.”
And because the roster was chock-full of quarterbacks in 2012, he decided to make the move to safety. Though it wasn’t the former high school quarterback’s first choice, he said he just wanted to get on the field any way that he could.
“I played in five or six games this season, just a couple of snaps,” Parker said. “Had I still been at quarterback, I wouldn’t have seen the field at all.”
Though he didn’t get any playing time in 2012, Parker remembers the first time the coaches called his name. It was last season against Savannah State.
“We won by a pretty large margin of victory,” Parker said. “I knew it was coming because (assistant head coach) Coach Wasden had prepped me on kickoff and what to do on defense. He said, ‘You’re going to get to play this week, so be ready.’ I immediately buckled my helmet (during the game) and got ready and put my mouthpiece in. We hadn’t scored. We were on like the 50-yard line, but I was ready.”
But as inspirational as Parker’s career has been, it hasn’t been without controversy.
Parker created a stir earlier this season after the Trojans lost to Abilene Christian 38-35. At that point in the season, Troy had just fallen to 0-3 and Parker was worried that fans and players alike were turning on each other.
So in an effort to provide an emotional lift to everyone in the stadium, Parker ran over to the end zone and saluted the band. He was the only one.
And for a reason.
“I said, ‘I appreciate you going over there and holding us up to the band, but we don’t do that when we get beat,” head coach Larry Blakeney said.
Parker caught a lot of flack. But for him, it had nothing to do with disrespect. In fact, it had everything to do with his immense amount of respect for the program.
“I play football because I care about the guys on my team, I care about being a positive influence on them and I care about this school and this university,” Parker said.
Now ahead of his final game as a Trojan Saturday, the story has come full circle. Parker was awarded with a promotion to the punt team prior to Saturday’s game. How he made his way onto the punt team is not surprising given Parker’s history to fight his way onto the field.
“Last week, one of our players got hurt, so our second-string punt cover guy was Sam Lebbie,” Parker said. “I went to Sam and Sam said he was tired…I told him, ‘I got you, Sam.’ I come off the field and Coach Wasden is yelling at me. ‘What are you doing? Who put you out there?’”
But Parker did such a good job, he was promoted for his final game as a Trojan.
“He yelled at me, but then he rewarded me for doing a good job,” Parker said.