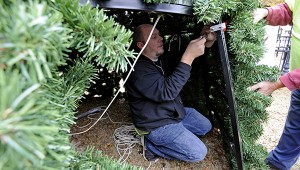 Joey Jones works on the Christmas tree on The Square.
MESSENGER PHOTO/THOMAS GRANING 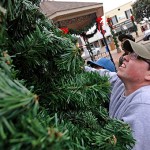 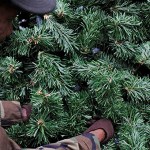 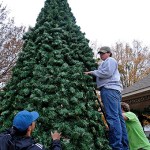 According to Caitlin Sexton, a member of the Troy parade committee, they are expecting over 75 entries in the parade. More than 60 units have applied so far.

“It’s a way to get the community together and to celebrate the spirit of the holiday season,” Sexton said. “This is my favorite season of the year and the Christmas parade has been a part of my life. I’m glad that we have seen so many community members involved.”

The theme for Troy Christmas parade this year is “Believe in the Spirit of Christmas.” The parade will start at 6 p.m., Dec. 1 with lineup starting at 5:30 p.m.

The route will begin on Elm Street, turning in front of Cotton Creek and entering the square backwards. It will turn left beside SheBang and Landmark, ending at the Courthouse parking lot. There is a Santa at the end of the parade for the children.

The parade is anticipated to last from 30 minutes to an hour and immediately after that, there will be a tree lighting ceremony, Sexton said.

“The Christmas Parade and Tree Lighting Ceremony is something we look forward to every year,” the mayor said. “Four children kindergarten through second grade will be selected to be the Honorary Grand Marshals and ride on the Mayor and Council’s float.

“The Christmas Parade gives us the opportunity to showcase downtown as well as the creativity of the parade participants. The music and fellowship make for an exciting Christmas atmosphere and help get the community in the spirit of Christmas.”

To come to line up, units must enter Elm Street from either George Wallace or Academy Street due to Elm Street being one-way beginning at 5 p.m. No through traffic will be allowed. Participants are advised to use Walnut Street and the Troy Public Library for necessary drop offs.

“The (CHHS band) will play Christmas tunes, usually Jingle Bells in the parade,” said Trent Burkett, the band director. “The kids are excited for this big community event. We look forward to it every year. We have practiced to prepare for the parade so that the students will do a good job and look good when they march downtown.”

In Brundidge, the Christmas parade at 6 p.m. on Dec. 2 will be full of music.

The Pike County High School chorus will be performing before and after the parade, said Teresa Ellis. The Pike County Elementary School children’s choir will sing at the annual lightning of the Christmas tree at the Bass House.

“Santa will be in the parade and have a special program afterward,” Ellis said. “We just want to celebrate the real meaning of Christmas.”

Lineup will start at 5:30 at the National Guard Amory. The parade committee is expecting between 25 to 30 participating units, Ellis said. PCHS and PCES will be selling refreshments during the parade.

The Goshen Christmas parade on Dec. 5 is no less festive and joyful.

“The theme this year is Christmas Past,” Tracy Shaver, Goshen Town Clerk said. “We are trying to bring back the nostalgic aspects; things from both Christmases a long time ago and the recent ones.”

People showing up for the parade will be in for a great deal of entertainment, according to Shaver.

“There is more than just the parade,” Shaver said. “One of the local pastors will come and read the Christmas story from the Bible.

“Food vendors will open at 5 p.m. Shebang is coming to perform a few dances. Hopefully we’ll have some musical entertainment by the choirs from local churches as well.”

The parade is set to begin at 6:30 p.m. with lineup starting at 6 p.m. in the Goshen High School Gymnasium parking lot.

“Everybody is welcome to participate in the parade and there is no entry fee, no application process,” Shaver said. “They can also get their pictures made with Santa after the parade free of charge.”

The winners of the T-shirt design contest from Goshen Elementary School will also be recognized during the night of the parade.