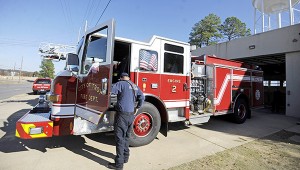 Fire fighters at Fire Station 2 ready to go take a general medical call on Thanksgiving Day. While others are able to enjoy a quiet day off with family, the fire fighters on A shift worked from 6 a.m. Until 6 p.m. Thursday.
MESSENGER PHOTO/THOMAS GRANING

Thursday was Jonathan Stephens’ first day on the job and his first Thanksgiving away from his family.

Stephens is a member of the Troy Fire Department A shift who spent the holiday working at the station downtown. The shift schedules for the department begin each day at 6 a.m. Shifts are scheduled so each firefighter works 24-hours straight, which means most of the firefighters working Thursday were unable to spend any time with their families.

Stephens, who is originally from Troy, said he wasn’t missing the holiday festivities with family as much because he understood being a firefighter was his job.

“It’s great,” Stephens said. “It’s work. We’re still doing a service. It’s a time for us to be able to do something.”

Unlike Stephens, Lt. Brandy Cox said this was one of many Thanksgivings he has worked, and over the years, the amount of calls that have come on the holiday have decreased.

“Honestly, it’s usually pretty slow,” Cox said. “For the most part, people have gotten safer about how they do things. Appliances have gotten better, so it’s safer.”

While being away from family on a holiday is not the best thing in the world for these men, Cox said it was something their families had ultimately become accustomed to over time.

“You learn to plan around it,” Cox said. “My family did it yesterday.”

Sgt. Josh Wambles chimed in that his wife’s family was doing a Thanksgiving feast Friday in order to accommodate his schedule.

“Wives and family learn they’re just as much a part of it as we are,” Cox said. “You just have to work.”

And while some families work around the official day for Thanksgiving, Lt. Daniel Hussey said his wife brought food to the station for the shift.

“My wife cooked and brought a bunch of stuff up here,” Hussey said. “We had a big lunch up here earlier.”

This was Hussey’s third Thanksgiving at the fire station since becoming a firefighter nine years ago. Hussey said although he had been able to spend time with his “real” family he had gotten to enjoy time with his “work” family for the holiday.