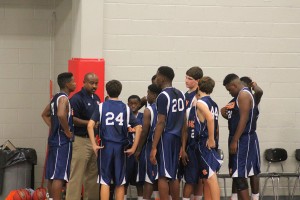 It was a battle of unbeaten teams Tuesday night with the Charles Henderson Middle School basketball team defeating Barbour County Middle School 40-32 in Louisville with both teams entering the game 5-0.
The Trojans trailed for most of the game, finally taking the lead midway through the fourth quarter.
The Trojans executed the halfcourt trap to perfection to force Barbour County into multiple turnovers en route to the late game scoring surge resulting in the lead, and ultimately, the win.
The game started slowly for the Trojans, shooting only 5 for 13 from the floor in the first half. At halftime, Barbour County lead 19 to 13.
The second half saw the Trojans come out with a vengeance as they ran a swarming defense that allowed Barbour County 13 points in the final two quarters.
By the end of the third quarter, the Trojans had cut the lead to three for the Jaguars.
As the fourth quarter started and the constant halfcourt trap wore on the Jaguars, the Trojans were able to get several fast break baskets and surpass the Jaguars, outscoring them 20-9 in the last quarter.
When the final buzzer sounded, the Trojans had secured the victory by beating Barbour County 40-32.
The Trojans were lead in scoring by Keonte Brantley with 12 points and Ahmad Dailey with 10. The Trojans are coached by Shelby Tuck.
CHMS finished the month of November with a perfect 6 – 0 record. The Trojans will begin a two-game home stand on Monday, Dec. 1 vs. Eufaula. Tip off is 5:00 PM.