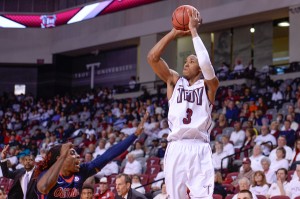 Troy men’s basketball fell victim to a late-game turnover Tuesday night that lead to their third-straight loss of the season.

After getting out to a fast 42-35 lead at halftime, the Trojans were outscored 37-28 in the second half.

With nine seconds remaining in the game and the score tied at 70, the Trojans committed a costly turnover at the top of the key and the Golden Eagles capitalized when junior forward Carey Norville raced the other way and slammed home the game’s deciding two points. Troy tried to tie the game in the last few seconds, but senior forward Kevin Thomas couldn’t get a shot off before the buzzer.

Troy got off to a shaky start in the game’s opening minutes. The Trojans committed three turnovers and fell behind 10-4 just four minutes into the game. But they stormed back behind aggressive play from Thomas and freshman Wesley Person. And at the 8:46 mark of the first half, they took their first lead, 20-19.

The Trojans fell behind with an immediate answer from Southern Miss but Abdul-Aleem sank three-straight 3-pointers to regain the lead, which Troy would hold onto going into halftime despite weathering a late 6-2 run by the Golden Eagles.

And the hot shooting continued for Southern Miss, who opened the second half on a 9-3 run to narrow the Troy lead to one. Troy was able to hold onto the lead in the second half until the 5:36 mark, trailing 62-61. From there, both teams traded baskets in front of an increasingly raucous Southern Miss crowd.

Junior guard Chris Bilbo tried to single-handedly win the game for Troy, giving the Trojans a 67-66 lead with 2:35 left and hit baskets to tie the score at 68 and 70.

But in the waning moments, turnovers and cold shooting bit Troy, as the Golden Eagles sunk the game-winning basket.

The game was a back-and-forth affair throughout with seven lead changes and three ties. The Trojans led for the majority of the game, but it was not enough to come away with the win.

The Golden Eagles handed Troy their third-straight loss after the Trojans fell to SEC opponents Ole Miss and Georgia one week ago.

Bilbo finished the game with 12 points on 5-of-7 shooting and four rebounds.

Person, who scored a career-high 25 points against Ole Miss and 20 against Georgia was held to just 10 points against Southern Miss Tuesday on just 4-of-12 shooting including 2-of-8 from 3-point range.

As a whole, Troy shot 40 percent from 3-point range and 49 percent overall. The Trojans finished the first half shooting 52 percent overall, but cooled off in the second half as they shot just 45 percent.

Southern Miss was led by Matt Bingaya, who scored 25 points as he shot 50 percent from the 3-point range. Norville led the Golden Eagles with five rebounds.

Troy saw the debut of a key player, junior guard Oskar Reinfelds, whose season was delayed by an injury. Reinfelds played 15 minutes and tallied two points and two assists.

The Trojans will return to the floor Dec. 2 when they host Alcorn State. Tip off between the Braves and Trojans is set for 7 p.m.