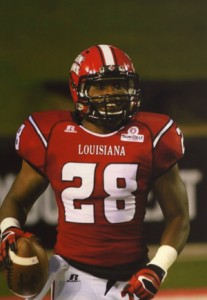 Saturday afternoon at Veterans Memorial Stadium, all eyes are sure to be set on Troy head coach Larry Blakeney as he coaches in his last football game for the Trojans.

But in all of the pomp and circumstance, Saturday’s season finale with UL-Lafayette will also be a momentous occasion for a member of the Cajuns.

More of a homecoming, though, not a mournful goodbye.

UL-Lafayette linebacker Marcus Jackson will cap his college career in Troy, just like Blakeney. But for Jackson, Saturday will be unlike any other away game.

The Goshen High School grad and former Eagle running back will be playing in front of a personal cheering section of his own, consisting of friends, family and his former high school football coach as he returns home to play in front of his home crowd for just the second time since leaving for college.

Jackson, who enrolled at ULL on an athletic scholarship in 2011 and was moved to linebacker last year, was a star running back at Goshen. He was named to the Dothan Eagle Super 12 as a senior and ran for 4,087 yards with 58 touchdowns during his high school career, including 1,380 yards and 20 touchdowns as a senior. He credits one of his former coaches, Jason Ford, for getting him the exposure he needed to sign with the Cajuns.

Though he never met Blakeney or had any interaction with him in the recruiting process, Jackson said that being a senior himself, he probably shares Blakeney’s sentiments in the heartache that is a season drawing to an end.

“I will definitely miss it (college football),” Jackson said. “Being around my team and the guys every day, just being a part of a group. That is one thing I will really miss.”

Saturday will mark the second time Jackson has returned to Troy as a Cajun. The first time was his freshman season.

But despite the excitement of getting to perform in front of friends and family, Jackson said he won’t approach this game any differently than he would any other game.

“My mom and my dad, my godparents, a whole bunch of my high school classmates and my high school coach will be there, but it will just be another game,” Jackson said. “I always go out and play with my all like I usually do.

But for Jackson, Saturday’s game will be his final chance to say thanks as he draws a chapter of his life to a close. Thanks to everyone who helped him get where he is, and a special thanks to his high school coach, Bart Snyder.

“He (Snyder) sat down with me and he was a big mentor for me getting this scholarship,” Jackson said. “I want to thank all of my family for sticking behind me.”