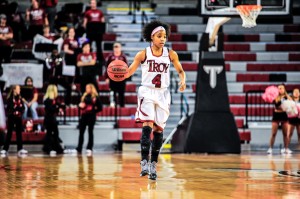 The Trojans (2-2), with a taste for dramatics as of late, erased a three-point deficit after the half by holding Florida A&M to just 8-of-32 shooting and outscoring the Lady Rattlers 35-26 after the break to secure their second-straight victory of the season.

Both Troy and Florida A&M shot poorly Monday night, however, as each team finished with an identical 32 percent shooting mark from the field. And a plethora of turnovers — 43 combined — kept the game close as neither team led by more than eight points Monday.

After emerging from the locker room down three, the Trojans quickly tied the game 49 seconds into the second half.

And as the second stanza progressed, the Trojan defense clamped down.

The Lady Rattlers committed 18 fouls in the second half and were held to just 1-of-10 shooting in the last 5:30 of the game.

Although Troy could only convert on 12 of their 20 second-half free throws, junior guard Simiah Blount made 3-of-4 in the final 30 seconds to ice the game for the Trojans.

“We’re certainly glad to get the win, but we’ve got to get a lot better,” Troy head coach Chanda Rigby said.  “We did win in a lot of categories, rebounding being one of them, but we’ve got to improve a lot if we’re going to beat some of the teams we’ve got coming up.”

Troy dominated on the glass Monday, outrebounding Florida A&M 55-48. Twenty-seven of those came on the offensive end, leading to 15 second-chance points.

Senior Ronita Garrett led the Trojans with 19 points and 14 rebounds, recording her third double-double of the season.

After posting a career-high 19 points off of the bench last Friday, senior guard Aissata Maiga had another strong showing Monday with 14 points before fouling out.

And Kristen Emerson grabbed a career-high 14 rebounds, with 10 of those coming on the offensive end.

Olivia Antilla led Florida A&M with 18 points off the bench. Antilla sunk two of the Lady Rattlers’ four 3-pointers while Troy made just two as a team.

Troy returns to the court Sunday with a home match up against Savannah State.