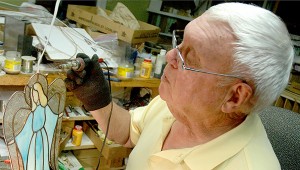 Charles Adams, above, is shown here workign on one of his many angel glass pieces. Adams will be hosting an open house for his glass shop this upcoming weekend.
MESSENGER PHOTO/JAINE TREADWELL

In the year 2005, Charles Adams announced the end of a longstanding tradition at Adams Glass Studio. Hosting Open House at the Studio on Thanksgiving weekend prevented his family from spending time together so he said, “no more.”

“That lasted a year and folks raised so much cane that we started back,” Adams said, laughing.

Open House at Adams Glass Studio had become a Pike County tradition and it’s hard to break with tradition.

“Not just for the community but for us, too,” Adams said. “It’s a lot of work but we really enjoy having family and friends here at Thanksgiving.”

“We just can’t not do it,” Adams said with a smile.

Holding with tradition, the 2014 Open House at Adams Glass Studio and Nut Shop will be Thanksgiving weekend, beginning with a wine and cheese party from 6 until 8 p.m. Friday and continuing from 9 a.m. until 5 p.m. on Saturday and from 1 until 4 p.m. on Sunday.

“We got a call from Santa Claus and he is going to make a special stop Friday night at Open House so we invite all the children to come and visit with Santa Claus,” Adams said.

Parents may want to take this opportunity to take photos of their children with Santa in this unique Christmastime setting.

“The Open House offers shoppers something that is sorely missing at the malls and big box stores,” Adams said. “Good friends, good food and good times make shopping more meaningful. And, it’s a unique opportunity to browse among the original works of some of the most noted artists and craftsmen.”

“This year, we have several new angels but they will not be revealed until Friday night,” Adams said. “I will say that I have two angels that are dedicated to our new grandbabies from China. But other than that, I won’t say.”

Dawn Peretiz will have her unique pottery for sale and Carol McCrady’s papyrus angels are always popular with shoppers.

Frances Davenport will be back with her handmade bonnets and aprons and animal outfits, including scarves and hats.

Charles Rabbit will have his wooden clocks on display and for sale and Rex Thrash will be back with his rustic birdhouses and walking/hiking sticks.

“We’ll have Brent Holmes CDs for kids and Aunt Sarah Jane’s foodlore and folklore books and, of course, we’ll have homemade candies and half-day suckers for sale, local honey, cane syrup, peanuts and short Cokes,” Adams said. “Open House and the Christmas Shoppe will be a relaxed shopping experience and the other shoppers will be neighbors and friends. You can’t beat that.”