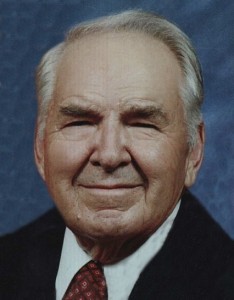 Clarence was born 7 March 1923 in Troy, Pike County, Alabama to Clarence E. and Ruth Somerset Cardwell. He joined the U.S. Army in 1943 and attended Carleton College in Minnesota during training. He saw fierce combat in the fall of 1944 with the 44th Infantry Division in the Vosges Mountains

for the liberation of Alsace-Lorraine.

On the G.I. Bill, he attended Auburn University and was awarded a degree in Mechanical Engineering in 1947. Shortly after he was hired by Atlantic Refining Co. On 18 December 1948, Clarence married Marjorie Goode at the Highland Park Methodist Church in Dallas. The couple moved to Midland, Te

xas the following month. They became members of the First Methodist Church family in 1949.

In 1952, Clarence and several Atlantic employees pooled their money to form the Midland Atlantic Federal Credit Union to help a fellow employee buy a house. This credit union, now the My Community Federal Credit Union, has grown from about seven members to more than 27,000 members and five branches.

Clarence lived with great charity, Christian grace and temperance, compassion for others, humility, dignity, and tolerance. He is missed.

Arrangements are under the direction of Nalley-Pickle & Welch Funeral Home & Crematory of Midland. Online condolences may be made at www.npwelch.com.