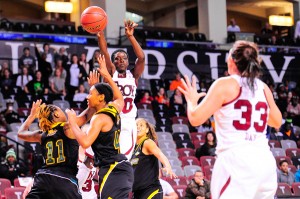 Friday afternoon against Southeastern Louisiana, that was the total amount of time that Troy lead in the game.

But in the end, one shot and two points was all the Trojans needed to complete a stunning 22-point second-half comeback against the Lions, winning 80-78 in the waning moments in the Trojans’ home opener at Trojan Arena.

With four seconds remaining in the game, Troy sophomore forward Lauren Day, who saw minutes on Friday for the first time this season, emerged from the bench and sunk a layup, putting the Trojans up 80-78.

“Thankfully I wasn’t thinking during the shot, otherwise I would have shot it over the goal,” Day said after the game. “I saw Aissata (Maiga) and was like ‘I hope she doesn’t pass it to me,’ but she did, so I just instinct kind of shot it and I looked up and there were four seconds left.”

Troy was anemic from the field in the first half, just 26 percent on 11-41 shooting.

The Trojans saw good shots from all areas of the floor, but couldn’t seem to get the ball to drop.

“The first half of basketball was the worst I’ve ever seen since I’ve been at Troy,” Trojan head coach Chandra Rigby said. “We just played terrible. And I don’t think it was a lack of the girls wanting to play well…we couldn’t get it together.”

Conversely, seemingly every shot from Southeastern Louisiana found the bottom of the net in the first half, as the Lions were 55 percent from the field and 45 percent from behind the arc.

The size and length of the Lions inside also gave Troy trouble early. The Trojans were outrebounded 25-19 in the first half and turned the ball over nine times, the majority of which came on errant passes in the paint.

Senior forward Ronita Garrett, who recorded a double-double in each of the Trojans’ games last weekend, finished the half with just three points and two rebounds.

When all was said and done, Southeastern Louisiana entered the locker room at half up 42-25, and the Trojans, heads hung low, looking for answers as to what they had just experienced.

“That (the first half) was a very low point in my coaching career,” Rigby said. “I don’t ever remember feeling that out of control as a coach before. Nothing we did was right and everything they did was right.”

It was clear Troy was intent on making some changes at half. As Southeastern Louisiana made their way back onto the floor to warm up at the five-minute mark before the second half, the Trojans were still absent.

Finally, they emerged with under a minute left.

No warm up shots, no anything. Just stoic faces.

And as the second half began, Troy started making baskets.

But right on cue, the Lions answered back, just like the first half, making almost every shot they took.

Determined to find an answer, Rigby looked to her bench to create a spark in the game.

Senior guard Aissata Maiga, who scored just four points in the first half, scored 15 in the second half, leading the Trojan comeback from 22 points down.

“We kept substituting and looking for a spark,” Rigby said. “Aissata (Maiga) did that. And then at the end of the game Lauren (Day), who had not been in previously…came in and I thought sealed the deal and really won the game for us in the last nine minutes.”

And junior Ashley Beverly-Kelley, who had been mostly absent for the Trojans in the first half, stepped up late in the game, tying the score on three separate occasions in the last two minutes.

And as the up-tempo offense of Troy finally started taking its toll on Southeastern Louisiana players, the Lions began turning the ball over.

Turnovers and sloppy fouls led to an 18-2 run by the Trojans.

And with the game in the balance, Maiga made all five of her free throws in the second half, setting Troy up for a momentous final layup by Day.

“As bad as we played, most teams would not have been able to pull that out at the end. We have a lot of fight in us,” Rigby said. “More than coaching adjustments, it was just desire and heart.”