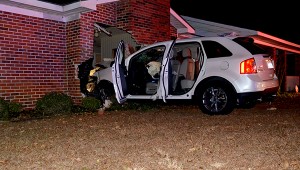 Authorities from Banks and the City of Troy responded the call at approximately 6:30 p.m. Friday.

Helen Livingston said this is the second time she had had a vehicle run into her house.

“All of the sudden the chimney fell,” Livingston said. “My dog and I were shocked.”

Livingston said she was sitting on the couch with her dog and cat in her den when the car crashed into the room.

“It was such an ordeal, I was sitting there minding my own business,” Livingston said. “All I heard was a ‘pop’ when (the pole) went down… I tried to see what happened.”

Livingston said the car seemed to have ran a stop sign, ran through a light pole and then kept going, crashing to the house. A similar accident happened five years ago, destroying her garage and laundry room, Livingston said.

When the inspector asked Livingston where she would like the new light pole to be built, Livingston jokingly she planned to rebuild the light pole where it had previously been because it was “the only thing that kept people from running through the house.”

“It could have been worse,” Livingston said after the incident.

Livingston was not hurt in the accident. Authorities said four people in the vehicle, two males and two females, were injured in the collision.

It is currently unknown how severe injuries were to the passengers and driver of the vehicle.

Authorities on scene were unable to comment on the situation or the severity of the injuries of those in the vehicle.