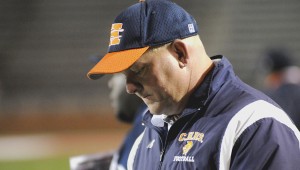 Escambia Academy is on the brink of a historic season.

The Cougars (10-1, 6-0), who will face off with Bessemer Academy Friday night in the AISA AAA state title game at Veterans Memorial Stadium, are sporting their best record since 1971.

Surely, they’ve had Nov. 21 circled on their calendars for a few months by now.

Fountain, who was the head football coach of Charles Henderson for 16 years before taking the job at Escambia Academy in 2012, will be returning to the city he where he cut his teeth for the first time in almost three years.

“My experience in Troy was great,” Fountain said. “My time I had at Charles Henderson was a wonderful time for me and my family. Basically, it is the home of my children and we enjoyed our time here.”

Fountain immediately proved his worth as a head coach in his first season with the Trojans. In his first year, one that was preceded by an 0-10 campaign, he finished 3-7. And in his second year, he continued the program’s turnaround by leading them to a 7-3 record.

In his first two years at Escambia Academy, he achieved similar results, leading the Cougars to a 6-5 record in his first season and a 10-3 record the next year.

Fountain, who coached at W.S. Neal and Evergreen before coming to Troy, said his long stint at Charles Henderson provided him the opportunity to learn from his mistakes as a head coach and carry those same principles with him to his position at Escambia Academy.

“When I came to Troy I was 30-years-old,” Fountain said. “The competition at Charles Henderson, I learned a lot of things there and learned what worked and what didn’t work in head coaching, specifically dealing with kids.”

And although his trip down memory lane to Troy will provide Fountain a dose of nostalgia, he said he is treating the game Friday just like any other. If anything, he said, the trip to Troy might be even more special for his son.

“I haven’t thought much about that (returning to Troy),” Fountain said. “Obviously, Troy was a good place that we enjoyed living in and as far as coming back to Troy to play, it’s probably not that big of a deal to me. It’s probably a bigger deal for my son. He’s a junior in high school. He was a ball boy when I was at Charles Henderson. This is for our kids at Escambia Academy and I’m looking at it more like it’s a ball game.”

The Cougars made the trip to Troy Thursday to practice and will go home and return again tomorrow for the game. At practice Thursday, Fountain said old players and friends came out to chat and catch up with him while they could.

“A lot of guys that played for me came out today and obviously that will make an old coach smile to see those guys,” Fountain said. “It’s a chance to brag about them to the players about what they used to be able to do. I had a pretty good relationship with all of the kids. Some of those guys are old men now.”

Now in his third year at Escambia Academy, Fountain said he still keeps up-to-date with Charles Henderson football and spoke with Demario Harris’ family following his death earlier this year.

“We knew his (Harris) family,” Fountain said. “On Saturday morning I pick up the paper to see how they did. A majority of their coaches and staff worked under me and we still keep in contact.”

The Cougars lost to Bessemer Academy in their regular season finale on Oct. 31, 32-14. It was Escambia Academy’s only loss this season.

And while Fountain hopes the Cougars’ season can end on a high note Friday with a state title, he knows he can always take solace in the fact that he is part of an eternal bond with the past and present of Charles Henderson, one that he will always carry no matter where he goes.

“When you have that long of period of time, it is impossible to narrow it down to one (memory),” he said. “Biggest was just the brotherhood we had on our football team. Our players and supporters and our kids we used to always say we had a great brotherhood there.”