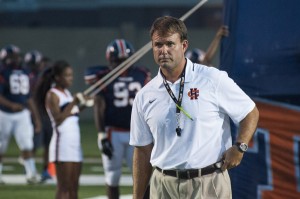 Charles Henderson High School head football coach Brad McCoy has been a part of many football teams, but the 2014 season is one he said he might remember most.

There were the dramatic highs such as the 48-42 OT win over Beauregard in the first round of the playoffs, and there was the tragedy of the death of senior Demario Harris, and the life-changing gunshot injury senior Jacquerean Marshall received.

In the books, CHHS will reflect an 8-4 record in their first year back in Class 5A. The season ended last Friday in Mobile at the hands of B.C. Rain, 50-14. But for McCoy, he could not be more proud.

“It was definitely a season of some ups and downs and adversity that challenged us as coaches and players,” McCoy said. “A couple of things we dealt with, Jacquerean and Demario, I don’t know if you can ever really be ready for something like that. Thinking back to how our community, our coaching staff and our players handled those adverse events, I really am proud of everybody. Right now we are in the middle of having class meetings with seniors and juniors, and we were reflecting. In the grand scheme of things, it puts a lot of things in perspective that sometimes you may take for granted or lose sight of.”

McCoy came to CHHS after spending five seasons at 3A Daleville, where he amassed a 34-19 record. Prior to that, he was an assistant at Prattville for six seasons and Northview for one year.

“I feel like I am exactly where I need to be, and that is the best way to sum it up,” McCoy said. “Looking back when I got into coaching, sometimes things happen for reasons that are out of your control. Sometimes they happen for reasons you do control. The thing is, no matter what the reason is, every place I’ve been, I’ve tried to better myself as a coach, help and improve my family’s well-being, and I’ve tried to surround myself with great people. I have been just really impressed by how everybody has welcomed me and my family.”

The Trojans will look to fill big shoes of senior quarterback Austin Ingram, who leaves as the all-time leading passer in several statistical categories, and outstanding senior linebacker Richard McBryde, who has verbally committed to take his talents to play football at Auburn.

McCoy is already scouring the hallways for talent that was not on the sideline this fall as he looks to replace key parts of the team.

“The first thing that jumps out, is an Austin Ingram – we have got to find a quarterback,” said McCoy. “Luckily at the running back position, with Duke (Mondaris Dixon) leaving, we had Jarred Wilson who got a lot of reps and we are excited about his future. In losing Richard McBryde, we have guys like Jaamal Smith and Quintin Daniels who are two freshmen that we are going to rely heavily on. Our placekicker Ben Salmon is another huge void we are going to have to fill.

“When you look at the seniors you’ve got and that we are losing, the only thing you can do is get down there in the middle school, evaluate those kids, and get in the hallways and pull these guys out. That’s one of the questions we had in our class meetings. Who do you know in our school that can help us that is not on this football team right now? I want to hear what these kids have to say. These are going to be guys we are going to reach out to and try to convince them to play.”

As McCoy looks back at how fast the 2014 season went by, he weighs everything and is proud of how his players handled the hard times, and he is optimistic about the future.

“I think we accomplished a lot from having so many new players and so many unknowns from last year,” said McCoy. “I think it was amazing that the team was able to build the chemistry it needed to and of course make the playoffs. We had a challenging schedule, playing up against 6A and 7A, and being able to win an exciting playoff win in overtime.

“There are so many positive to take from this year, and that is what we are telling the kids not to lose sight of,” McCoy said. “It may be the one football season I remember the most throughout my career.”